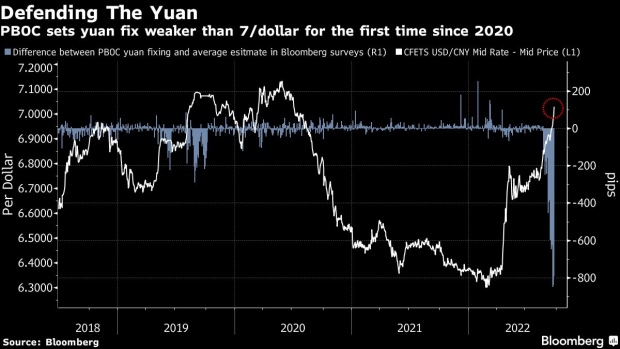 (Bloomberg) -- China made it more expensive to bet against the yuan with derivatives, ramping up support for the currency as it slides toward the weakest level against the dollar since the 2008 global financial crisis.

The People’s Bank of China said Monday it’ll impose a risk reserve requirement of 20% on currency forward sales by banks. Since August, the central bank has sought to limit the yuan’s losses through its daily reference rate as well as demanding that lenders set aside more foreign exchange as reserves.

The decline of the yuan is accelerating as divergence grows between a dovish PBOC and and an aggressively hiking Federal Reserve. China’s push-back mirrors that of Japan, with both seeking to limit the damage from their weakening currencies, with the risks that further declines may lead to ever more capital outflows and drag down the region.

“By imposing the risk reserve requirement, the PBOC aims to slow the pace of depreciation but it will unlikely turn the tide,” said Peiqian Liu, an economist at NatWest Markets. “The currency weakness is in line with most major currencies and the broad dollar strength.”

The additional risk reserve requirements would make it expensive for traders to buy foreign-exchange through forwards or options, a move that may curb bearish yuan bets. The central bank had lifted the risk reserves for foreign-exchange forward trading from zero to 20% in 2015, before lowering it two years later and raising it again in 2018. The PBOC scrapped it in 2020 after the yuan rebounded.

The PBOC on Monday also set its fixing at weaker than 7 per dollar for the first time since 2020, which NatWest’s Liu sees as signal that it doesn’t intend to defend any specific level. The currency is allowed to move 2% around the daily reference rate, and it got within a whisker of the weak end of the trading band.

Liu Guoqiang, deputy governor of the PBOC, said earlier this month that the central bank won’t allow a “reasonable, equilibrium and basically stable” exchange rate to be changed while warning traders against betting on specific yuan levels.

Read: From Fixing to Signaling, How China Manages the Yuan: QuickTake

The PBOC has more policy tools at hand to defend the currency, Jingyang Chen, a foreign exchange strategist at HSBC Holdings Plc said. “We haven’t seen a lot of signs of meaningful intervention,” Chen said in an interview on Bloomberg Television. “If we saw a quick fall in trade weighted yuan, then we might see more direct intervention or another cut to the foreign exchange reserve ratio,” she said.

The yuan’s weakness may push the PBOC to delay any further monetary policy easing until later this year. After a surprise cut to a key interest rate in August, the PBOC paused its easing this month as the US Federal Reserved hiked rates. Bloomberg Economics estimates the Fed will tighten through the rest of 2022 and 2023, and the PBOC will maintain an easing stance over the period, cutting its one-year rate to 2.45% by end-2023.