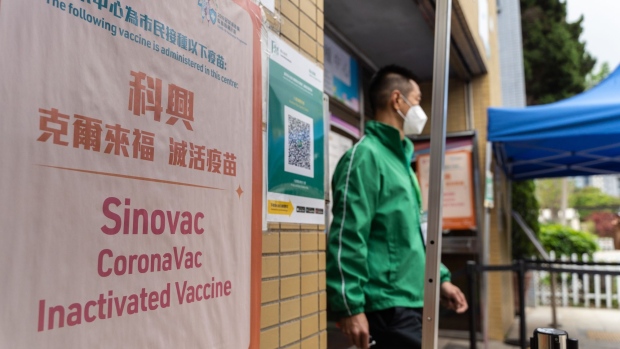 China objected to a key provision of a World Trade Organization proposal to waive intellectual-property rights for Covid-19 vaccines that Beijing said would discourage shipments of doses to poorer nations.

The development may complicate the WTO’s multi-year effort to reach an agreement to help speed production of vaccines in the developing world by permitting certain countries to authorize the use of Covid-19 jabs without the consent of the holders of the patent rights.

China’s opposition is problematic because WTO agreements require support from all 164 members, meaning any one government can block the adoption of a vaccine IP waiver for any reason.

WTO delegates met in Geneva Friday to offer their initial views on an unfinished proposal that was negotiated by WTO Director-General Ngozi Okonjo-Iweala and four WTO members -- the U.S., the European Union, South Africa and India.

For many, the talks are viewed as a critical test of the WTO’s relevance after the beleaguered organization failed to advance any multilateral agreements for the better part of the past decade.

Li Chenggang, China’s ambassador to the WTO, said the country could not accept some of the fine print that excludes developing members which exported more than 10% of global vaccine doses from the waiver. Li said WTO members should instead be encouraged to opt out of the decision.

“We can’t accept the second brackets of footnote 1 which uses the criterion of export share to define eligible members,” Li said, according to a copy of his prepared remarks. “Such an unreasonable and arbitrary criterion will send a wrong signal to the outside and also have systemic implication to the future negotiations.”

“If the second brackets remains as it is, I have a serious doubt on how the long-held spirits of unity and cooperation could be preserved in this organization,” he said.

China, which has exported about 2 billion doses of its Sinovac jab, is the only developing country member that shipped enough Covid-19 vaccines to surpass the proposal’s 10% eligibility threshold, according to WTO data.

U.S. policymakers want to prevent China from obtaining access to the mRNA technology that Pfizer Inc., BioNTech SE and Moderna Inc. used to produce Covid-19 vaccines, fearing that China will steal it to gain an unfair advantage.

Vaccines have become a flashpoint for trade protectionism. India has been criticized by some nations for imposing an export ban last year and remains below the 10% eligibility threshold despite being a major vaccine manufacturing hub in the developing world.

Waive Pharma’s Vaccine Rights? What That Would Mean: QuickTake

China wasn’t the only member that had difficulties with the proposed WTO text. Indonesia, Pakistan, Nigeria and Malaysia all expressed their concerns about the text’s proposed eligibility requirement, according to a Geneva-based trade official who attended the meeting.

Two other key vaccine manufacturing nations -- the U.K. and Switzerland -- said they opposed waiving IP rights, according to the attendee. Britain and Switzerland have repeatedly said such a reprieve would do little to expand access to vaccines in the developing world.

An EU delegate said the text represents the most promising path to a meaningful outcome on the vaccine waiver issue, according to the attendee. South Africa and the U.S. said they were still conducting domestic consultations into the matter. The Indian delegation said it was committed to reach a meaningful outcome.

WTO delegates are expected to further discuss the waiver text during Monday’s general council meeting in Geneva. There is less than five weeks remaining for delegates to produce a final text for their ministers to approve at the WTO’s ministerial conference scheduled for June 12-15.