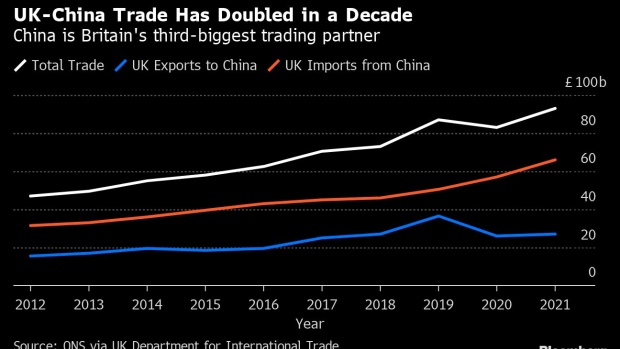 (Bloomberg) -- The rivals to replace Prime Minister Boris Johnson are locked in a battle to take the toughest line on China, firmly drawing a line under the vaunted golden era for Sino-British ties.

Liz Truss, the front-runner in the Conservative leadership race, has branded Chinese tech giants a security risk, called to arm Taiwan and, in private, labeled China’s crackdown in Xinjiang a genocide, according to reports. Rishi Sunak has named China the “biggest long-term threat to Britain.”

“There’s a perception China’s actually more of a hostile-state relationship so you should re-consider all areas of engagement,” said Julia Pamilih, head of research at the China Research Group, set up by Conservative MPs to scrutinize Sino-UK ties.

If Truss or Sunak follow through with a hardline approach when one of them becomes prime minister on Sept. 6, they’ll be weakening ties with the UK’s third-biggest trade partner – a major source of cheap imports – just at a time when the cost-of-living crisis is biting the hardest, with inflation soaring into double digits.

They’ll be in line with the US, which is keen for allies to support it in more clearly taking on China over human rights issues.

But amid fears about the involvement of China-backed companies in critical UK infrastructure, the new leader will also be closing the investment spigots that their fellow Tories David Cameron and George Osborne sought to open just seven years ago when they were prime minister and chancellor of the exchequer.

In 2015, the two men said Britain would be China’s “best partner in the West,” promising a “golden era” in relations.

Now, both Truss and Sunak are apparently calculating that a degree of economic damage is an acceptable price to pay for defending western principles.

“There will be a cost in terms of diplomatic relations and probably in the Chinese willingness to invest in capital projects here,” said Royal United Services Institute Chairman David Lidington, the de facto deputy to Theresa May when she was prime minister. Still, “the Chinese will look at actions rather than slogans.”

A lot has changed since the Cameron era amid alleged Chinese human rights abuses against the Uyghur ethnic group, suppression of civil liberties in Hong Kong and President Xi Jinping’s failure to condemn Russia for the war in Ukraine. That’s prompted the UK, US and European Union to take a harder stance.

“For too long, politicians in Britain and across the West have rolled out the red carpet and turned a blind eye to China’s nefarious activity and ambitions,” Sunak said last month. “They are stealing our technology and infiltrating our universities. And abroad, they are propping up Putin’s fascist invasion of Ukraine by buying his oil and attempting to bully their neighbors, including Taiwan.”

Earlier this year, when Sunak was Chancellor of the Exchequer, Treasury officials drafted a deal to deepen trade links with China, but that initiative was called off and seems unlikely to be resurrected.

The Chinese government is less concerned about Sunak than Truss -- the clear front-runner. It’s trying to discern the approach she’d take as prime minister, two people familiar with the matter said on condition of anonymity.

Truss used her opening pitch as foreign secretary in 2021 to characterize China as a strategic threat contrasting with the “network of liberty” she wanted with allies such as the US and Australia. That alliance was strengthened with the creation of the AUKUS partnership, designed to counter China’s growing clout in the Indo-Pacific.

During the leadership contest, Truss advocated cracking down on Chinese-owned companies such as TikTok Inc. and warned “we can’t be strategically dependent on China.”

While such jockeying is driven by the internal dynamics of the Conservative Party -- there’s a significant caucus of anti-China Tory MPs -- it also reflects that Britain is becoming less willing to separate growing trade ties from managing security risks.

Tens of thousands of Chinese students studying in Britain contribute £2.5 billion ($3 billion) annually to the economy, while 880,000 Chinese tourist visits brought in £1.7 billion in the year before the pandemic. Total trade between the two countries jumped 5.5% to £93.4 billion in the year through March.

British companies are already rethinking their operations in anticipation of the UK working to decouple from China, Tony Danker, director-general of the Confederation of British Industry told the Financial Times last month. Removing China from corporate supply chains will push up prices, he said.

China also stands to lose: its exports to Britain are more than double the flow the other way. Moreover, China saw involvement in UK industries such as nuclear as a showcase to broaden the appeal of Chinese technology.

The direction of travel by Truss and Sunak isn’t new. Even as Johnson said less than a year ago that Britain wouldn’t “pitchfork away” Chinese investment, his government worked to end China General Nuclear Power Corp.’s involvement in British nuclear power projects. His administration also blocked Huawei Technologies Co. from participating in Britain’s 5G network.

It remains to be seen whether campaign talk translates into tough action in power. With important industrial-policy decisions awaiting Johnson’s successor, their stance will soon become clear. Britain is probing a Chinese-led takeover of Newport Wafer Fab, which owns the UK’s largest semiconductor plant, with a decision due in September. MPs are calling for a ban on the sale of closed-circuit television cameras from the Chinese firms Hangzhou Hikvision Digital Technology Co. and Zhejiang Dahua Technology Co.

As with all Western leaders, Truss or Sunak will ultimately have to decide how much they’re willing to turn a blind eye to issues such as human rights abuses for the sake of economic gain.

China’s belief is that after the campaign, pragmatism will prevail and the UK will seek a mutually beneficial relationship, according to the two people familiar. But Sam Hogg, who runs the Beijing to Britain website which monitors the relationship, predicts rocky times ahead.

“I don’t see it returning to that golden-era type pragmatic approach,” said Hogg, who expects Truss to win. “She’s willing to put political headlines over the economic outcome.”