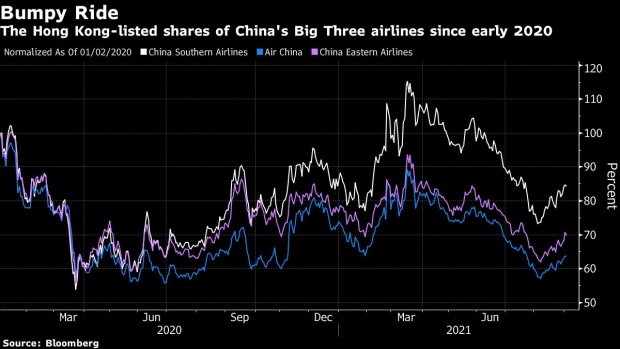 (Bloomberg) -- China’s top three airlines told analysts the government’s tight restrictions on international flights could last into the first half of next year due to Covid-prevention measures ahead of the Beijing Winter Olympics in February, HSBC Holdings Plc said.

The continuation of curbs means a full international travel recovery isn’t likely until 2024, analysts including Parash Jain wrote in a note after briefings with Air China Ltd., China Southern Airlines Co. and China Eastern Airlines Corp. following the trio’s recent results. When reopening does occur, it will likely begin with Singapore, South Korea and other places with high vaccination rates, HSBC said, citing the carriers.

China’s so-called Five One policy essentially limits airlines to just one international flight a week, while passenger capacity is capped at 75%. Foreign carriers can also operate only one flight a week to China.

The three Chinese airlines all suffered hefty losses in the first half of 2021, though the figures were an improvement from a year earlier thanks to a recovery in domestic demand. China Southern posted the smallest deficit, at 4.69 billion yuan ($726 million). The domestic rebound stalled in subsequent months due to fresh Covid outbreaks, though they’ve now been brought under control.

The carriers remain bullish on a recovery in domestic traffic, with China Eastern expecting a return to normal levels in the first two weeks of October, Jain and his colleagues at HSBC wrote. The airlines’ domestic traffic has already returned to 99% of 2019 levels, up from a low of 73% in the week of Aug. 9, the analysts said.

HSBC has buy recommendations on the Hong Kong- and mainland-listed shares of the three, apart from Air China’s A shares in Shanghai, which are rated hold. It added that China Southern will introduce five Boeing Co. 737 Max jets this year if the country’s regulators approve the aircraft to fly again.