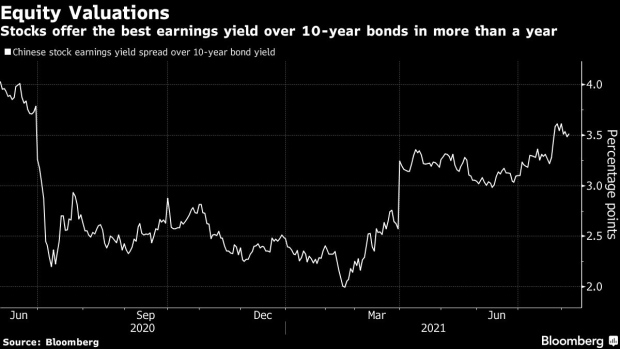 (Bloomberg) -- China’s regulatory clampdown is prompting global investors to reassess how they split their portfolios between stocks and bonds.

Offshore investors including Amundi Group are more cautious on the immediate outlook for Chinese stocks after a sharp selloff in the wake of the government’s move to rein in the country’s most powerful technology companies. While equities are cheap, many prefer the haven appeal of debt for now.

“With renewed risk aversion over regulatory clampdowns, Chinese bonds as safe havens should be in a better spot than equities,” said Chang Wei Liang, a macro strategist at DBS in Singapore.

The selloff in Chinese equities has coincided with strong gains in its sovereign bonds. That’s making stock valuations hover near the cheapest level since June 2020 relative to bonds, a strong lure for bargain hunters.

Citing market uncertainty, Amundi, which manages around $2.1 trillion in assets, is also cautious on equities and has cut its exposure “meaningfully” since the beginning of this year, going from “very overweight to somewhat underweight China” in its regional portfolios, said Nick McConway, a London-based Asia ex-Japan equities portfolio manager. While he sees the potential for further declines he ultimately expects the correction to create long-term investment opportunities.

In a separate note, JPMorgan analysts Tiffany Wang and Grace Ng wrote that any cheapness in government bonds has been eliminated by the rally in yuan rates after the cut in bank reserve requirements. Still, they also stick to their overweight view on bonds as an insurance against high odds that the growth outlook will weaken further.