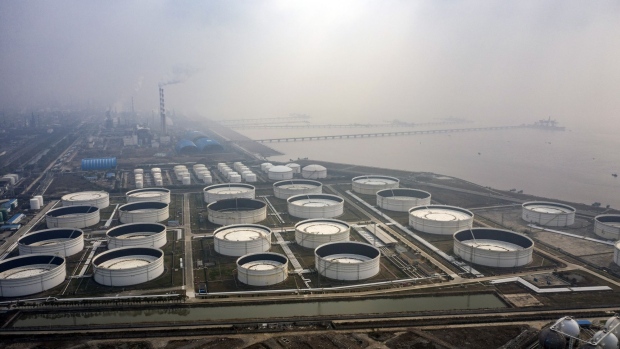 An oil and petrochemical storage facility on the outskirts of Shanghai, China, on Tuesday, March 1, 2022. Oil extended its relentless rally before an OPEC+ meeting as the International Energy Agency warned that global energy security is under threat following Russia’s invasion of Ukraine. Photographer: Qilai Shen/Bloomberg , Bloomberg

(Bloomberg) -- China has begun running down its crude oil stockpiles, which could signal that refiners are getting ready to boost fuel exports as part of the government’s efforts to revive the economy.

Onshore crude inventories stood at 909 million barrels as of Sept. 15, the lowest since May 12, according to Emma Li, an analyst with Vortexa Ltd. About 1 million barrels a day has been drawn from stockpiles over the past three weeks, she said. Satellite data firm Ursa Space Systems puts the figure at 1.05 billion barrels, down 7.5 million barrels from the prior week, and the fourth weekly draw in five, according to analyst Geoffrey Craig.

The reduction may only be seasonal, but it could also be an indication that processors are ramping up run rates in anticipation of a push to produce and export more fuels, including gasoline and diesel. Refiners and traders have applied for an extra 15 million tons of export quotas, which, if approved, would raise allocations so far this year to a level similar to that seen over the whole of 2021.

National oil companies are considering raising their utilization rates by 10% to 15% next month, according to a note from industry consultant FGE, although whether the extra quotas are granted is still subject to jockeying between different government departments, said Energy Aspects Ltd.

JP Morgan Chase & Co., meanwhile, said it thinks China is unlikely to approve that level of exports, calling the volumes applied for excessive.

Oil refining activity has been holding near pandemic-era lows in recent months. China has been slow to use up stockpiled crude because of a weaker economy and the government’s stringent virus controls, which have stifled the usage of transport fuels and slowed petrochemicals demand.

The slump in China’s metals-intensive property market appeared to deepen in July and August, says Bloomberg Economics. Fresh cuts in mortgage rates and efforts by local governments to generate demand for housing are failing to get traction, and the sector is set for a painful, long-term adjustment. Decisive policy steps could be needed to prevent a crash scenario.