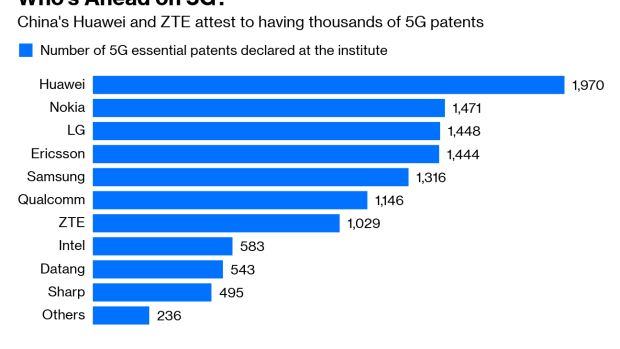 (Bloomberg Opinion) -- How can investors profit from China’s race with the U.S. for 5G supremacy? Finding the answer is as tricky as figuring out the geopolitics.

The nation’s sleepy telecom stocks came back to life after Huawei Technologies Co. CFO Meng Wanzhou was detained in Canada in early December. While the official charge was that the company had violated U.S. sanctions on Iran, many in China interpreted the action as another attempt by the American government to thwart the country’s advance in 5G. Huawei leads the world in the number of declared essential patents for next-generation wireless technology, according to the European Telecommunications Standards Institute.

The Chinese equipment maker’s woes have only served to spark investor enthusiasm for anything 5G. On Dec. 7, the Ministry of Industry and Information Technology awarded 5G spectrum licenses to its three telecom operators, allowing them to conduct final trials before widespread commercial rollout in 2020. A month later, the government said it will issue temporary licenses in some cities as early as this year. Unlike Europe and the U.S., China is wasting no time in moving ahead on 5G.

Shares of wireless antenna makers and state-owned China Tower Corp. have been on fire. The monopoly operator of mobile-phone masts has gained more than 40 percent in Hong Kong since early December, bringing its market capitalization to $37 billion. On Monday, when Chinese traders returned after the week-long Lunar New Year holiday, the dozen or so mainland-listed companies that manufacture wireless antennas jumped 4.3 percent. Hong Kong-listed Comba Telecom Systems Holdings Ltd. has soared more than 70 percent.(1)

Investors who want to ride China’s 5G gravy train may have a hard time buying into the biggest beneficiaries, however. Ideally, large equipment manufacturers provide the best exposure — namely, Huawei, which is privately held, and ZTE Corp., which trades in Hong Kong and Shenzhen and says it has more than 1,000 5G essential licenses.

Few dare to buy into ZTE now, though. The company swelled to a $23 billion market value in late 2017 on speculation of faster 5G spending, only to crash in June after the U.S. imposed a ban on purchases of vital American technology as punishment for Iran sanctions violations. While the ban was adjusted to a fine of at least $1 billion and a management overhaul, geopolitical concerns linger. ZTE still earns 35 percent of its revenue in overseas markets, which have become battlefields as China and the U.S. vie for the top spot in 5G.

By comparison, antennas are an inferior play. In theory, operators will buy many more in the 5G era. So-called Massive MIMO technology will allow multiple data streams to be transmitted and received simultaneously over the same radio channel using different antennas.

In reality though, China’s state-owned operators don’t want to deal with so many suppliers, using instead a centralized procurement system to buy everything from key manufacturers such as Huawei and ZTE. These two in turn outsource some work to third-party suppliers such as Comba. When demand for antennas soars, Huawei and ZTE invariably will take a sweet cut, limiting profits for the smaller fish.

As for China Tower, corporate governance is an issue. Its largest customers — China Mobile Ltd., China Unicom Hong Kong Ltd. and China Telecom Corp. — are also its controlling shareholders. Between 2013 and 2017, the three operators spent 1.7 trillion yuan ($250 billion) of capital expenditure transitioning to 4G from 3G. The 5G roll-out will be even more expensive, with a base station costing as much as twice as a 4G equivalent.

That gives the operators an incentive to squeeze cost savings from their tower unit. They have played hardball before. In 2014, when the wireless providers were ramping up 4G, the average cost of building a base station more than halved, Citi Research estimates. China Tower currently charges a 10 percent markup over costs.

The advent of 5G in China will be a bonanza for many, from equipment suppliers and electric-car makers to consumers. The biggest gains are out of the reach of equity investors, though. The best plays aren’t in the public domain.

(1) Besides Comba, antenna makers that have had a boost since December include Mobi Development Co., Tongyu Communications Inc. and Guangdong Shenglu Telecommunications Tech Co.