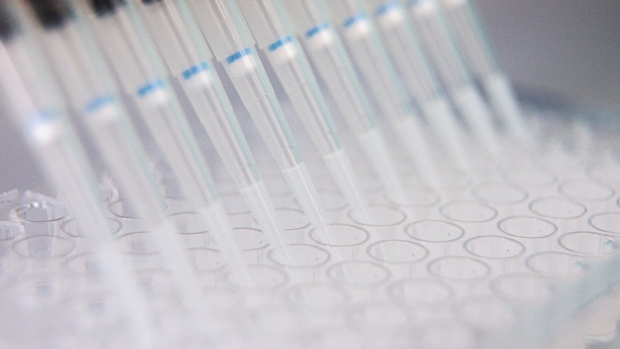 A lab technician uses a multichannel pipette dropper during the antigen quantification process of the coronavirus vaccine research at the Valneva SA laboratories in Vienna, Austria, on Thursday, Aug. 6, 2020. The U.K. has signed agreements to buy 90 million doses of vaccines in development by drugmakers including Pfizer Inc., BioNTech SE and Valneva SE, joining countries around the world racing to secure supplies of protection against Covid-19. Photographer: Akos Stiller/Bloomberg , Bloomberg

(Bloomberg) -- A global clinical trial of a drug that has been approved in China for treating Alzheimer’s disease was terminated because of a lack of funding and Covid-19 disruptions, the developer said.

Covid’s resurgence across several regions made completing the study of oligomannate, also known as GV-971, hard because many patients couldn’t show up for follow-up visits, according to Green Valley Pharmaceutical Co. Demand for the company’s drugs has been sluggish during the pandemic, and it also failed to secure external funding, which made investing more in the trial difficult.

Ending the trial “is undoubtedly a huge loss for Green Valley and researchers,” the closely-held company said in a statement.

The future for Alzheimer’s drugs looks grim. Biogen Inc. decided to cease marketing of its controversial Alzheimer’s therapy Aduhelm after the US government and many insurers declined to pay for it in most cases.

Green Valley’s drug was the first new therapy approved for treating the debilitating neurodegenerative disease in 17 years when it got the blessing from China’s drug regulator in late 2019.

In the wake of its approval in China, the drug faced doubts about its effectiveness in reversing, or even slowing, the cognitive declines of Alzheimer’s patients. Many experts considered the relatively short duration of the late-stage study carried out in China to be insufficient.

To seek further legitimacy for GV-971, Green Valley embarked on a 4 billion yuan ($591 million) global study in 2020 that sought to enroll some 2,000 patients across the U.S., China and Europe. The company said the study eventually enrolled less than 500 patients.

Green Valley, based in Shanghai, said it still aims to get GV-971 approved in international markets and will seek to resurrect the global study when conditions permit.