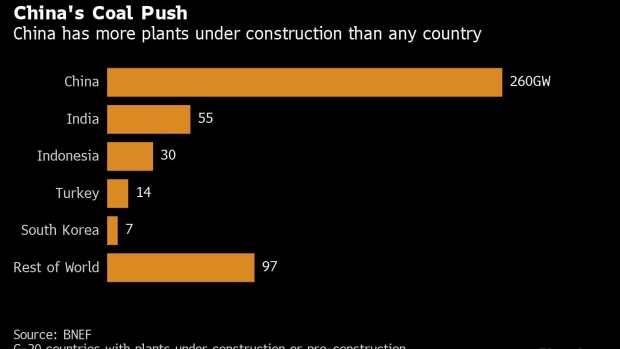 (Bloomberg) -- As the planet lurches toward catastrophic levels of warming, China’s biggest banks have been ratcheting up their financing of the dirtiest fossil fuel of all: coal.

Chinese lenders have helped coal companies raise about $10 billion selling bonds so far this year, data compiled by Bloomberg show. That’s more than double the $3.8 billion raised in the same period of 2021 and marks one of the busiest starts to a year since the Paris climate accord was struck in 2015.

While HSBC Holdings Plc and other global banks have said they’ll no longer finance new coal plants, China continues to expand existing projects, part of a campaign to increase domestic supply and curb imports. China has about 260 gigawatts of coal power planned or under construction, more than the rest of the G-20 combined, according to BloombergNEF data.

Domestic banks are helping finance that expansion. So far this year, the top 10 arrangers of bonds for coal-related projects globally are, once again, all based in China. China Securities was No. 1, followed by China Citic Bank, Huatai Securities Co. and China Construction Bank Corp.  A decade ago, there were seven non-Chinese banks in the top 20; today, there are just two.

Global financial firms have also backed off coal loans. As recently as 2017, only one Chinese bank was among the top 10 providers, a list dominated by banking giants including Credit Suisse Group AG and JPMorgan Chase & Co. This year, Chinese institutions are the only lenders, led by Shanghai Pudong Development Bank Co.

Representatives for the banks weren’t immediately available to comment.

China is by far the world’s largest emitter of carbon dioxide, responsible for 31% of the global total in 2020, and more than twice that of the U.S., the second-biggest polluter. The coal funding provided by its banks minimize the impact of the broader efforts to stop financing the fossil fuel, and the overall push comes as the world’s leading climate experts and economists warn that too much money is still going to dirty fuels and too little to clean energy.

Last week, the United Nations Intergovernmental Panel on Climate Change issued a stark warning that the world’s emissions must peak immediately to have a shot at keeping the temperature from rising more than 1.5° C, the stretch goal of the Paris Agreement. Finance is both driving the problem and a “critical enabler” in the energy transition, the panel said.

The outlook is “frightening,” said Heffa Schuecking, director of Urgewald, a nonprofit environmental and human rights group in Sassenberg, Germany. “It’s amazing to me that many financial institutions aren’t even willing to draw the line for companies that are still developing new coal assets.”