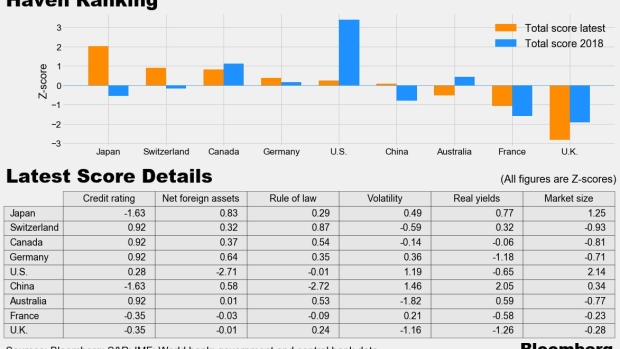 (Bloomberg) -- To a world full of fixed-income investors starved of safe assets with attractive yields, China’s government bonds had become a tempting sight in recent years.

However, red flags are now being hoisted. A series of government crackdowns on everything from property developers to technology firms is triggering questions about whether a sudden change in regulations could harm foreign investment in the securities.

“I can’t help but feel a higher regulatory risk for the nation’s bonds,” said Akira Takei, a global fixed-income money manager at Asset Management One Co. in Tokyo who has yet to buy the securities. “Although I don’t expect any restrictions to be introduced in China’s government bond market, I have to examine how tighter regulations outside the bond market will impact overall investment in China.”

The stature of yuan bonds had risen in tandem with China’s growing influence on the global economy and as foreign-exchange reserve managers bought more of the securities. Yet now, amid growing isolation from the U.S. and a far-reaching effort to close the domestic wealth gap, the shifting landscape of the rule of law in China threatens to undermine their attractiveness for investors in search of a haven. The country’s notes ranked sixth out of nine debt markets analyzed by Bloomberg for haven qualities in a study that took into account factors such as net foreign assets and volatility. Japanese bonds topped the rankings, followed by Swiss and Canadian securities. U.K. gilts placed last.

Chinese bonds scored minus 2.72 for rule of law in Bloomberg’s study, the lowest among all the markets. The securities also fared poorly for credit ratings in the analysis, scoring minus 1.63 to tie for the bottom place with Japanese debt. (See below for more on the methodology of this analysis.)

The property industry has become a prime example of the risks to investment in China as tighter restrictions on lending and soaring borrowing costs led developers to struggle with funding, raising concern over their solvency. Kaisa Group Holdings Ltd. has recently joined troubled industry giant China Evergrande Group in seeing its cash crunch reach the point where it hurt investors in high-yielding wealth products.

In the context of the nation’s government bonds, one key concern is that a sudden change in rules could make it harder for investors to sell their holdings or repatriate proceeds.

“If capital movement regulations are tightened, for example through the introduction of restrictions on transactions in market access, overseas investors are likely to suffer disadvantages,” Minoru Nogimori, an economist at the Japan Research Institute Ltd., wrote in a report.

Despite those risks, overseas investors have kept putting billions of dollars in China’s government bonds. Their holdings have grown by 426 billion yuan ($67 billion) in the first 10 months of the year, the most for the period since 2018, according to data from ChinaBond.

Inflows are likely to continue given China’s bonds remain appealing from the perspective of real-yield differentials, according to Frances Cheung, a rates strategist at Oversea-Chinese Banking Corp. in Singapore. Among the nine markets analyzed by Bloomberg, only China offers positive inflation-adjusted yields.

Those yields and the nation’s willingness to open up its financial sector to foreigners suggest the importance of China’s debt is more likely to grow, regardless of whether it’s seen as a risk asset or haven.

“I recognize a risk of a sudden regulatory change,” said Manabu Tamaru, a portfolio manager in Tokyo at Barings LLC. But it’s unlikely that sovereign bonds would be a target because that “would trigger an exodus of foreign funds. So I think bond investors are in a safe position.”

For Tracy Chen, a Philadelphia-based portfolio manager at Brandywine Global who bought Chinese debt for the first time in 2020, the securities act as an “alternative safe haven” as the second-largest bond market that’s still underinvested in by foreigners.

“We view the recent regulatory tightening and deleveraging in the property developer sector as painful in the short term, but beneficial for long-term growth,” she said. “To us, it is China’s version of ESG and should signal higher quality growth going forward.” ESG refers to investments that take environment, social and governance principles into consideration.

At TD Securities in Toronto, Sacha Tihanyi believes the stability of China’s currency in recent months should underpin the case for its bonds to serve as havens. And if the regulatory risks worsen the nation’s economic slowdown, that could actually be a positive for the securities, according to Tihanyi, who is the head of emerging markets strategy at the firm.

“Should the PBOC take a sharper turn toward easing, bonds could rally, there is a case to be made there,” said Brendan McKenna, a strategist at Wells Fargo & Co. in New York. Still, he thinks a further regulatory crackdown in 2022 in China risks killing the appeal of the assets as a regional haven. “Even with a stronger easing bias, investing into that kind of regulatory uncertainty is still a challenge and a risk many investors may not be comfortable taking.”

So what exactly does it take to be considered a haven asset, anyway? According to a European Central Bank working paper, safe assets are debt issued by a “safe” government of a country that has its own central bank, a stable currency, protection of property rights and low inflation. They are also highly liquid, an International Monetary Fund report said.

The nine bond markets analyzed for this piece come from the IMF’s data on the currency composition of official foreign-exchange reserves. Germany and France, the biggest economies in the euro zone, represent the shared-currency bloc.

The haven scores in Bloomberg’s study are based on the following six criteria:

Market capitalization is adjusted for central banks’ holdings in countries where the monetary authorities buy government bonds as part of their policy. This is intended to measure the depth of the market’s liquidity.

All numbers were then standardized using Z-scores and the total scores are the sums of all the variables.