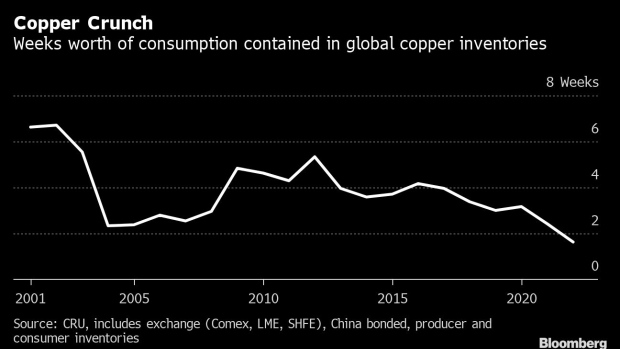 (Bloomberg) -- For the past 15 years, the center of gravity of the global copper market has been a row of warehouses in Shanghai’s free-trade zone where the Yangtze River meets the Pacific.

Traders from London to Lima would obsess over the flows in and out of Shanghai’s huge bonded copper stockpile. It was the focal point for a multi-billion-dollar cash-for-copper trade, whereby Chinese companies would use metal as collateral for cheap financing. A cottage industry of analysts sprang up to estimate the size of what became the world’s largest cache of copper metal.

But now China’s bonded warehouses are all but empty. The once-frenetic flow of metal into the stockpile has come to a juddering halt as two dominant financiers of Chinese metals, JPMorgan Chase & Co. and ICBC Standard Bank Plc, have halted new business there. Numerous traders and bankers interviewed by Bloomberg said they believe the trade is dead for now, and some predicted the bonded stocks could drop to zero, or close to it.

The implications are being felt across the market, as the world’s largest copper consumer becomes more reliant on imports to meet its near-term needs at a time when global stocks are already at historically low levels. The Chinese copper market is at its tightest in more than a decade as traders pay massive premiums for immediate supplies.

For now, the miners, traders and financiers arriving in London this weekend for the annual LME Week jamboree are largely cautious on the near-term prospects for copper, given concerns about the global economy. But many in the market say they are braced for price spikes when the macroeconomic news eventually improves. And without its buffer of bonded stocks, any pickup in Chinese demand could have an explosive effect on the market.

“The physical market is so tight, it’s like a room full of gunpowder — any spark and the whole thing could blow,” said David Lilley, chief executive of hedge fund Drakewood Capital Management Ltd. Without the Shanghai bonded inventory, “we are living without a safety net.”

China’s bonded copper stockpile (so called because metal there is held “in bond,” before import duties have been paid) first came to the world’s attention in the wake of the global financial crisis. When copper prices slumped, Chinese traders bought up all the metal they could find — thanks to Beijing's massive stimulus plan — making copper the leading indicator of the global economic recovery.

But China wasn’t actually consuming all that copper — at least, not right away. Instead, the traders directed it into the bonded stockpile, using the metal to raise financing. An expansion of government credit to support trade and infrastructure meant there were many easy opportunities for companies to raise money with copper — using bank lines for import financing or repurchase agreements, known as “repos,” to turn their metal inventories into short-term cash.

The money they raised could then be reinvested in other areas, such as the red-hot property market. Many Chinese companies with no connection to the commodities industry hired teams of traders and bankers to get into the copper game. The ebbs and flows of China’s credit cycle began to drive the global copper market.

At the peak in around 2011-12, China’s bonded stocks held about a million tons of copper, worth some $10 billion. This month, they totaled just 30,000 tons, according to industry consultancy Shanghai Metals Market. That’s down nearly 300,000 tons from earlier this year and the lowest level in decades, according to several Chinese physical traders who have been in the market for over 15 years.

The decline began several years ago, with the massive  warehousing fraud at Qingdao in 2014 that caused many banks and traders to reassess their appetite for the Chinese metals industry as a whole.

Read: Tycoon Running a Quarter of China’s Copper Trade Is on the Ropes

JPMorgan and ICBC Standard Bank have not entered new metal financing trades for bonded metal since September, and people familiar with the matter said it’s not clear if they will restart.

The Chinese physical traders, who asked not to be identified, said they expected Shanghai’s bonded copper stocks to drop further — potentially to zero, or just a few hundred tons — as market participants have lost confidence in the business of using metal to raise financing for other purposes.

To be sure, China’s copper imports and production have remained at high levels despite the economic slowdown: the metal just hasn't been going into bonded warehouses.

But the consequence of the collapse in stocks is already being felt in the market. Copper for immediate delivery on the Shanghai Futures Exchange traded this month at a 2,020 yuan premium to copper for delivery in three months – the most since 2005. Physical premiums — which are paid over and above exchange prices to secure physical metal — have risen to the highest in nearly a decade at Yangshan, in Shanghai’s bonded zone.

And it’s not just in China that stocks are low. Robert Edwards at CRU Group estimates that global copper stocks currently stand at just 1.6 weeks of consumption — the lowest ever in the consultancy’s data going back to 2001.

As a result, any improvement in the macroeconomic outlook or pickup in Chinese demand could have dramatic implications for global copper prices.

“If the Chinese economy does get a bit better we could in a lot of commodities be saying, ‘Oh, where’s the inventory?’” said Mark Hansen, chief executive of metals trader Concord Resources Ltd. “We’ll find it just doesn’t exist.”