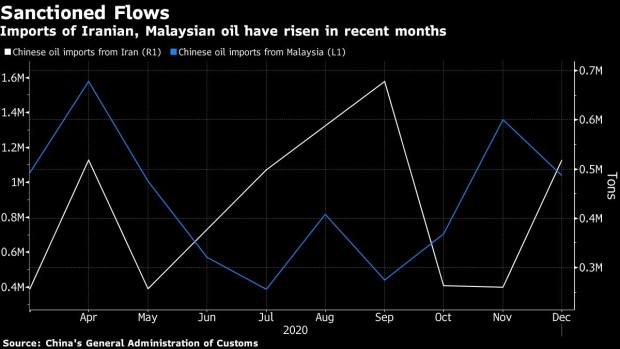 (Bloomberg) -- An increase in Iranian oil exports to China has received some unwanted attention in recent days and is now prompting fears of a clampdown.

Indonesia seized two vessels -- one of which was Iranian-flagged -- on Sunday that were transferring oil at sea, a common way to disguise the origin of cargoes. That came after Washington issued a seizure order for what it believes is 2 million barrels of Iranian crude on board a tanker heading to the U.S.

The actions have highlighted a jump in Iranian oil production that’s happening amid speculation President Joe Biden will take a softer approach to the country than his predecessor, who imposed sanctions in an attempt to get Tehran to renegotiate a nuclear pact. Companies including Kpler, Petro-Logistics SA and SVB International LLC have all reported seeing an increase in shipments.

China is the fastest-growing importer of the oil both directly and via ship transfers and co-mingling of Iranian crude with other Persian Gulf varieties, Citigroup Inc. analysts including Ed Morse said in a note. Tanker tracking groups have reported Iranian weekly crude exports rising to more than 1 million barrels a day at times even before the end of last year, Citi said.

The purchases of Iranian crude -- sometimes branded as Omani oil -- have depressed Oman crude prices on the Dubai Mercantile Exchange, traders said. There’s been an uptick in buying inquiries for alternative Brazilian grades in the past week and an improvement in offer prices, they said.

See also: Doctored and Rebranded Oil Blacklisted by U.S. Winds Up in China

While the exact volumes of Chinese purchases are hard to pin down, the country has kept buying cargoes from Iran and Venezuela, which has also had access to its oil restricted by the U.S. Domestic refiners that continue to buy sanctioned crude tend to keep a low profile for fear of being singled out and cut off from the American banking system, according to the traders.

China imported 519,000 metric tons of Iranian crude in December, almost double that in October and November, according to customs data. It hasn’t bought any Venezuelan oil since September 2019, the official figures show. Purchases from Malaysia, some of which may have been from ship-to-ship transfers, exceeded 1 million tons in November and December.

Iran is starting the year as the “biggest wildcard” for oil prices, Citigroup’s Morse said in the note. There’s unlikely to be a renegotiation of the nuclear deal or sanctions relief from the U.S. until August when a new Iranian government is in place after elections in May, he said.