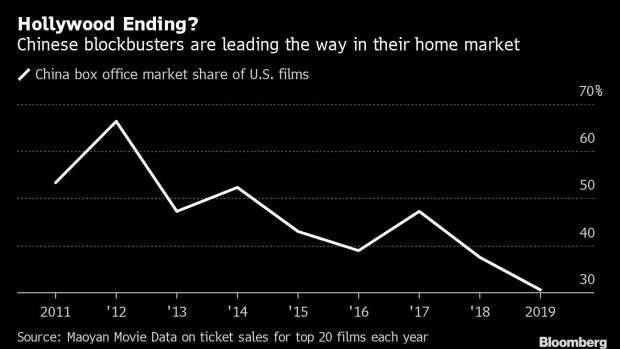 (Bloomberg) -- China’s biggest week of the year for movie-goers is packed with at least 12 new releases -- all in the local language -- a sign that Hollywood studios are headed for another challenging year in their No. 1 overseas market.

The lineup of potential Lunar New Year blockbusters Jan. 24-30 is drawing even more attention than usual because China is set to overtake the U.S. as the world’s largest movie market this year. The milestone is important as well for U.S. filmmakers that have come to rely on revenue from China to backstop big-budget “tentpoles,” films made to be big earners to offset the financial riskiness of a studio’s other titles.

“Chinese and American audiences are tired of these tentpole movies,” said Beijing-born Jean Su, a producer and co-founder of Broadvision Pictures, a Los Angeles-based independent film and TV studio that focuses on movies for global audiences including North America and China. She said some recent tentpoles haven’t done well in the U.S. and may not get the box-office they expected in China, either.

The rising dominance of Chinese blockbusters is in line with a broader shift toward local goods as a trade war with the U.S. stokes nationalism. Older American franchise films like “Fast & Furious” and “Transformers,” that used to offset mediocre box-office sales in the U.S. with big China receipts, have seen their share of China’s estimated $29 billion movie market dwindle.

At the same time, some of China’s franchises are seen as on the rise.

“Detective Chinatown 3” and “Lost in Russia,” installments of two of China’s most commercially successful comedies, are among the films forecast to do well over the holiday. “Leap,” based on the true story of the Chinese women’s volleyball team, is another potential blockbuster amid rising interest in nationalistic themes.

While China’s filmgoers are becoming choosier, especially when it comes to Hollywood movies, there’s still a big Chinese audience for great work from the U.S., said Gary Walters, chief executive officer of Los Angeles-based Bold Films, which produced films such as “Whiplash” and “Nightcrawler.”

Overall box-office sales increased by 4.1% in China last year, while the slice accounted for by Hollywood titles fell to about 36%, the lowest since at least 2011, according to data from Maoyan Entertainment.

Even if Hollywood’s market share in China drops for another year, U.S. films will probably show a net gain in revenue from the country, given broader growth in the market, predicts Walters.

There were some successes last year among U.S. films in China.

Disney’s Marvel franchise “Avengers: End Game” had $614 million in gross box-office last year in China, enough to make it the year’s third-biggest film there, according to IMDB.com.

A gain this year in China would have to come without the likes of an “Avengers: End Game,” which did especially well as a popular franchise that tied up themes built up over years.

The first likely 2020 hit in China from Hollywood may be “Mulan.” Walt Disney Co.’s $150 million live-action feature starring Yifei Liu, Donnie Yen and Jet Li is scheduled for a March 27 China release, according to website IMDB.com.

On the schedule for Lunar New Year: “The Rescue,” a maritime disaster thriller directed by one of China’s most successful action movie directors Dante Lam and shot by Oscar-winning cinematographer Peter Pau. Such action themes have been popular in China, with the Lam-directed “Operation Red Sea,” as the top-grossing film in 2018 and “Wolf Warrior 2,” reaching the all-time No. 1 box-office ranking.

Hollywood Fears 2020 Drop, With No ‘Endgame,’ ‘Frozen’ Ahead

“Jiang Ziya: Legend of Deification,” an animation based on an ancient Chinese legend, is ranked as the second-most anticipated film on the holiday schedule in a poll conducted by Maoyan. The most was “Detective Chinatown 3.”

“In the past, people wondered what would be the all-time highest sales if all of the top grossers were released during the same season,” said Liu Zhenfei, data analyst at China’s largest online ticketing platform Maoyan Entertainment. “This year, the Lunar New Year season is that kind of matchup, with what will probably be the best-of-the-best-selling films in one week.”

To contact the editors responsible for this story: Sam Nagarajan at samnagarajan@bloomberg.net, Dave McCombs