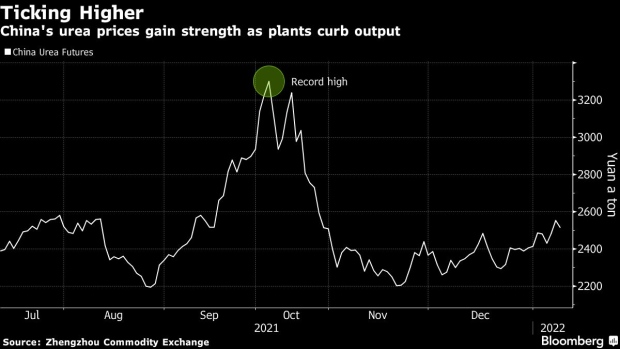 BEIJING, CHINA - DECEMBER 07: Visitors look at the Big Air venue, left, that will see competition in freestyle skiing and snowboarding for the Beijing 2022 Winter Olympics at Shougang, a former power plant which now also houses the headquarters of the Beijing Organizing Committee of the Olympic Games, on December 7, 2021 in Beijing, China. The games are set to open on February 4, 2022.(Photo by Kevin Frayer/Getty Images) , Photographer: Kevin Frayer/Getty Images AsiaPac

(Bloomberg) -- China’s urea plants are getting caught up in Beijing’s drive to ensure blue skies for the Winter Olympics, which includes ordering factory shutdowns to curb air pollution.

Three plants in northern Shanxi province were asked to begin operating at 50% capacity due to pollution, driving up domestic prices for the nitrogen fertilizer, said Scotiabank analyst Ben Isaacson. Futures in Zhengzhou rose almost 5% on Friday to the highest since October, but have pared gains this week.

As Beijing ramps up pollution controls in the lead up to the winter games in February, more urea factories could be asked to suspend or cut output. China, a key supplier of urea, sulphate and phosphate to the global market, has curbed fertilizer exports since late last year to protect domestic supplies, a move that worsened a global price shock and risked stoking food inflation further.

“Chinese exportable supply is firmly out of the market through May,” said Bloomberg Intelligence analyst Alexis Maxwell.

The outlook for urea is also dependent on the cost of energy sources like coal and natural gas, which have risen around the world due to shortages and winter heating needs.