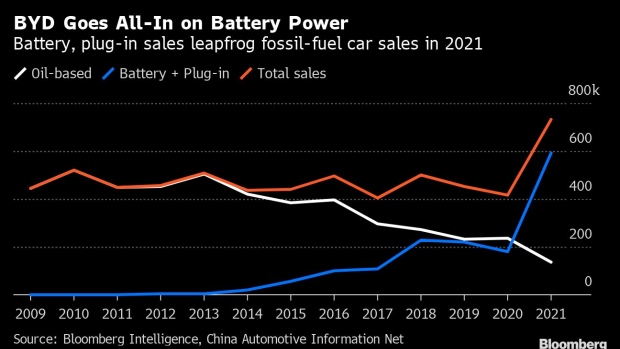 (Bloomberg) -- China’s BYD Co. said it has stopped production of fossil-fueled vehicles since March to focus on electric and hybrid cars amid Beijing’s promotion of greener automobiles to cut pollution.

The Shenzhen-based company will still produce and supply components for gas-fueled vehicles and provide service and after-sales guarantees to existing customers, BYD said in its March output and sales statement to the Hong Kong exchange Sunday.

The carmaker’s Hong Kong-listed shares jumped as much as 5.4% Monday.

The company, which is backed by Warren Buffett, said it was committed to building low-carbon and environmentally friendly vehicles in the Sunday release.

The automaker went further on Twitter, saying that “by doing this, BYD has become the first automotive manufacturer in the [world] to stop the production of fuel combusting vehicles.”

Read more: China’s EV Stocks Are on a Tear as BYD Leads on Robust Sales

BYD’s vehicle production rose 170% to 292,165 units in the first quarter, including 4,635 oil-fueled units, according to the statement.

The Chinese automaker, which also makes EV batteries, is the first domestic player to sell 100,000 EV or plug-in hybrid cars a month, according to Beijing-based advisory firm Sino Auto Insights.

“The announcement was pretty ceremonial,” said Sino Auto founder Tu Le. “What we’ll see is their acceleration into the EV sector. It enables them to focus, so they can move a little bit faster.”

BYD’s all-in shift is in contrast to what Ford Motor Co. is doing, Tu added. The U.S. automaking giant said last month it will split its EVs and legacy automaking businesses into separate units within the company as it accelerates its electric shift.