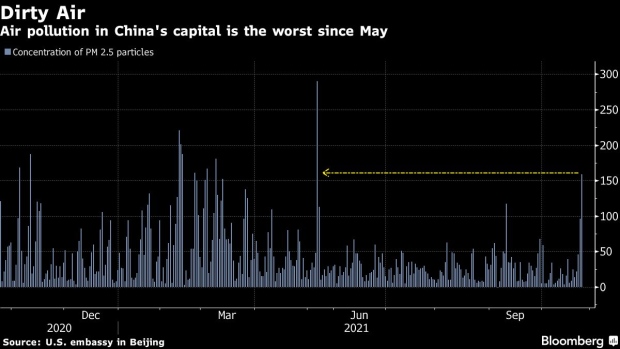 (Bloomberg) -- China’s capital city is suffering through its worst air pollution since May in the wake of its decision to boost coal production to address a power crunch.

The concentration of PM 2.5 particles -- the most-hazardous, tiny particulate matter floating in the air -- soared to 151, according to data from the U.S. Embassy. An air quality index compiled by the capital’s government stood at 182, which officially fell in the “moderate pollution” range.

The worsening air quality highlights the challenges Beijing faces balancing its need to burn coal to heat homes and maintain economic growth with meeting its targets for addressing climate change and a desire to have clear skies for the Winter Games starting in February.

The nation has been racing to solve an energy crisis that’s stifling key industries and that some economists warn risks crimping global growth. For more than a month, energy shortages have rippled through manufacturing centers for steel, aluminum and cement. Prices of coal -- which the country relies on for almost two-thirds of its electricity -- have made dizzying gains.

Officials have reversed recent moves toward cleaner energy and better safety standards by reviving old and dirty coal mines. They’re also scrapping rules intended to keep power prices in check for industrial consumers, and are considering increasing imports of foreign fuel at a time when trade relations with countries like Australia and the U.S. remain frayed.

Why China’s Facing an Energy Crisis and What It Means: QuickTake

Last month the government announced plans to expand air pollution curbs in place in Beijing and neighboring Hebei province to more cities across major coal, steel and oil hubs. The goal is to ensure blue skies for the games, similar to what was done before Beijing hosted the Summer Olympics in 2008, when a swath of factories in the industrial regions near the city were shut.

China’s ruling Communist Party is sensitive to public complaints about air pollution, and has made addressing the issue one of its highest priorities. Around 2013, Beijing residents started referring to the problem as “airpocalypse” because levels of tiny particles in the air peaked at 35 times the World Health Organization’s recommended limit.

Over the next few years, the government made progress improving air quality by ramping up enforcement of policies restricting coal burning in Beijing and surrounding areas. In July 2018, pollution levels averaged 44 micrograms of airborne particles per cubic meter, the seventh lowest since recordings began in 2008.