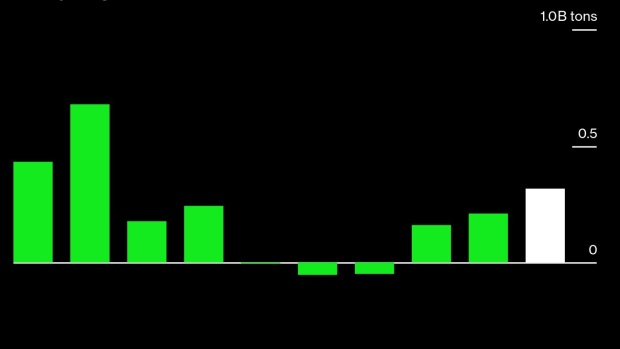 People tend to their vegetable garden near a coal-fired power station on the outskirts of Ningbo, Zhejiang Province, China. Photographer: Qilai Shen/Bloomberg , Bloomberg

(Bloomberg) -- China’s carbon dioxide emissions from fossil fuels grew by 319 million tons last year, or 3.4%, the most since 2011, according to data from BP Plc’s annual Statistical Review of World Energy.

Consumption of oil and natural gas in the world’s biggest energy user rose to record levels, while coal also grew, though not enough to surpass the amount it burned in 2013, according to the data released Wednesday.

The increased emissions of greenhouse gases came even as China’s economic growth by the end of the year had ground to the slowest since at least the early 1990s.

The outlook for emissions by the world’s biggest polluter have been upended by the coronavirus pandemic, which brought industrial activity to a halt earlier in the year. More recently there have been signs of an increasingly strong rebound, including record oil imports and power generation growing at the fastest level since September. As well, the sluggish activity at the end of 2019 had already prompted Beijing to relax some environmental restrictions.

The nation, which mines and consumes half the world’s coal, has been adding power plants that burn the most carbon-intensive fossil fuel since 2017, according to Li Shuo, senior global policy adviser for Greenpeace in Beijing.