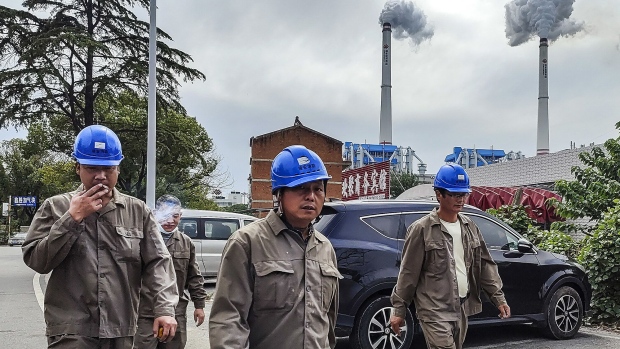 (Bloomberg) -- Chinese regulators are mulling a deeper cut in new carbon quotas, a move that would make it more expensive to run small and inefficient coal power plants.

A Ministry of Ecology and Environment draft plan for carbon allowances for more than 2,000 power firms over 2021 and 2022 proposes that large coal plants will be given 7.9% fewer allowances per megawatt-hour generated, according to a person familiar with the document. The cut is deeper than a 1% reduction proposed earlier. It would be even harsher on coal plants smaller than 300 megawatts, which would see their benchmarks cut by 12%.

An MEE spokesman didn’t return a phone call for comment. The plan hasn’t been finalized and could be subject to change, said the person, who asked not to be identified because the plan isn’t public.

When China launched its carbon market last year, it gave power plants too many allowances, allowing several companies to keep surplus ones at the end of the year. By slashing issuances now, plants will have to buy those excess allowances and drive up prices, or burn less coal.

Consulting firm Refinitv raised its 2022 China carbon price forecast to 65 yuan per ton from 58 because of the tighter benchmarks, said Qin Yan, a senior analyst there. Allowances were 57.46 yuan a ton Friday.

“The new plan could remove cumulative surplus from first period,” she said.