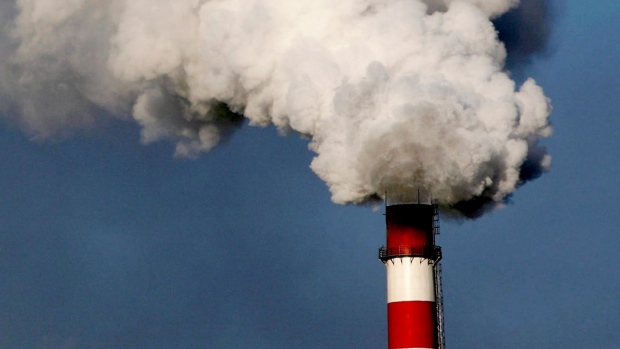 CHIFENG, MONGOLIA - FEBRUARY 23: (CHINA OUT) Smoke billows from chimneys at the Chifeng Thermal Power Plant on February 23, 2007 in Chifeng, Mongolia. Qin Dahe, head of the China Meteorological Administration, has blamed global warming for the unusually warm weather this winter, the severest drought in 50 years, and for the lowest water levels in the Yangtze River. China is carrying out a number of measures to counter these effects, including a plan to improve energy efficiency by 20 percent before 2010, according to state media. (Photo by China Photos/Getty Images) Photographer: China Photos/Getty Images AsiaPac , Photographer: China Photos/Getty Images AsiaPac

The size of China’s carbon market will expand more than 30-fold over the next decade as it covers more industries and polluting becomes more expensive, according to Citigroup Inc.

The market’s physical turnover will rise from about $800 million this year, its first in operation, to around $25 billion by the end of the decade, analysts including Tracy Liao said in a March 8 note. The expected growth underscores both the massive potential of the emissions trading scheme, and the modest impact it’s expected to have at the outset as the government seeks to ease companies into compliance.

China’s launch means that one-fifth of global emissions will now fall under a tax or trading scheme, according to Citi. At the same time, the pressure to cut emissions is likely to be inflationary and could leave Chinese factories more expensive relative to countries without controls, the bank said.

“The Chinese national ETS as currently rolled out should play a limited role in reducing emissions at first,” Liao said. “We expect a series of developments to transform China’s ETS into the world’s largest effective carbon trading scheme and a key building block of the country’s 2030 peak emissions commitment.”

China made the rules for its ETS official in February and wants online trading to begin by the end of June. The market will begin with the power sector, and will add other energy-intensive industries such as steel, petrochemicals and cement through 2025.

Citi expects an initial carbon price of $4 a ton and emissions allowances representing about 200 million tons to be in circulation this year. Those are expected to rise to $25 a ton and 1 billion tons in circulation by 2030, the bank said, based on a survey.

At $25 a ton, the carbon cost for a coal-powered aluminum smelter could rise to $375 a ton, equivalent to current profit margins, according to Citi.

“If policies are stringent enough, this could precipitate the shifting of supply chains of emission-intensive industries from China to other countries that do not face the same regulatory costs,” Liao said.