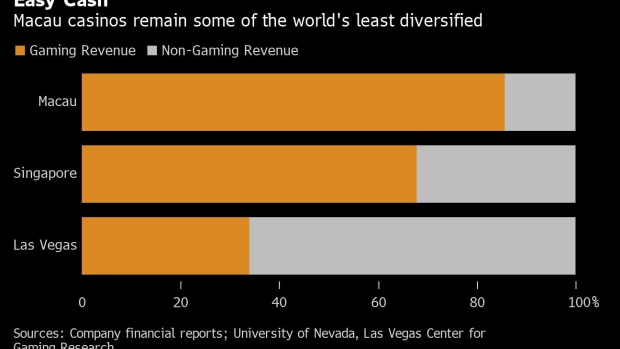 (Bloomberg) -- To many investors, Macau’s push to extend oversight over the world’s largest gambling hub came as a shock, triggering a record selloff in casino shares. To long-term observers, however, it was just the latest move in China’s grand plan to transform the $24 billion economy.

For years, Beijing has been focused on trying to control an industry that’s enriched the only Chinese territory where casinos are legal but also provided an avenue for capital outflows for the country’s rising elite. Authorities have been steadily tightening their grip, with facial-recognition software installed in Macau’s ATMs, cash withdrawals limited, and a digital currency under consideration to better track transactions.

At the same time, the government has been laying the groundwork for the dilution of Macau’s reliance on gambling. Unveiled in 2019, China’s blueprint for the Greater Bay Area -- a region that includes Hong Kong and parts of southern China -- sees the former Portuguese colony departing from its decades-long identity as a casino Mecca to become a global leisure and tourism hub. Think sports stadiums, convention centers and traditional Chinese medicine parks instead of more baccarat tables.

“What the government wants, and what Beijing wants, is to have a lot more non-gaming facilities,” said Allan Zeman, chairman and an independent director of Wynn Macau Ltd., one of the six casino operators with licenses to operate in the enclave. “The border will kind of disappear. Macau will become a much bigger place, so gaming is just one part of a city that will have a lot more.”

Last week’s announcement of revisions to the law governing casinos was one of the most definitive signs yet that there’s no turning back for Beijing.

The proposed changes, which are now up for consultation with the public and industry, came just a week after the Chinese government released a plan to further integrate Macau with the Chinese mainland. The city is being encouraged to develop non-gaming industries in a special zone on the neighboring island of Hengqin -- currently divided between Guangdong province and Macau -- with a focus on high-tech manufacturing, cultural tourism, Chinese medicine, conventions and sports, according to a master plan released by Beijing earlier this month. Gambling won’t be allowed.

Gambling in Macau goes back more than three centuries, with the practice legalized there in 1847 as a way to fill the colonial authority’s coffers. By the late 19th century, gaming taxes had become the government’s main income. For decades the industry was monopolized by a company co-founded by late billionaire Stanley Ho before opening up in 2002 to the current players. Macau eventually surpassed Las Vegas, and today bettors can pose before a fake Eiffel Tower or stroll along replica Venetian canals on its main strip.

But a shift is firmly under way. While still employing one-fifth of the city’s workforce, the gambling industry’s contribution to Macau’s gross domestic product had dropped to 51% before the pandemic hit, from 63% in 2013, according to the latest government data.

The license renewal process for the city’s six casino operators is shaping up to be a key test of Beijing’s pivot. With the permits set to expire in less than 10 months, the government is expected to pressure the firms -- who have seen gaming revenue contribute 85% of overall revenue on average the past three years, according to Bloomberg calculations from company reports -- to boost investment in non-gaming sectors.

Macau’s government will likely nudge casino operators to invest in projects in Hengqin, even if their profit outlook is questionable, given the limitations on expanding further in Macau, said Ben Lee, a managing partner at gambling consultancy IGamiX.

While the casinos have recently been doubling down on luring more so-called mass market bettors, who may spend more time dining out and shopping than at the tables, entire projects separate to the casino business could be more challenging. Convention activities, the ferry service and income from retail accounted for less than 3% of net revenue in 2019 for Sands China Ltd., the largest operator in Macau by gaming revenue.

And they face stiff competition for non-gaming business from elsewhere in the region. Hong Kong -- just a ferry ride away -- has an established convention and exhibition industry and hosts major international events from art festivals to rugby tournaments. The island province of Hainan has also seen a domestic tourism boom due to its tax-free status and wants to develop similar industries.

The moves significantly reined in what was once the lifeblood of Macau, Song said. Now, Beijing’s wider plan could have a similar effect on the casino industry overall.