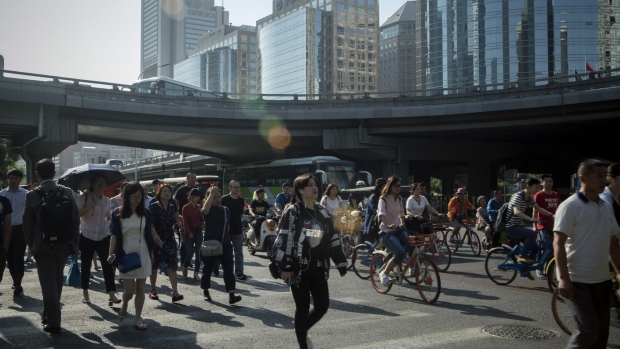 Pedestrians cross a road next to cyclists and other vehicles in the central business district in Beijing, China, on Friday, June 1, 2018. The People's Bank of China announced on Friday that it would add debt instruments tied to small-business and the green economy. Photographer: Giulia Marchi/Bloomberg , Bloomberg

(Bloomberg) -- China’s central bank cut the amount of cash lenders must hold in reserve for the second time this year, ramping up support for an economy racked by surging Covid cases and a continued property downturn.

The People’s Bank of China reduced the reserve requirement ratio for most banks by 25 basis points, it said in a statement Friday. The adjustment takes effect on Dec. 5 and will inject 500 billion yuan ($70 billion) of liquidity into the economy.

The cut is aimed at “keeping liquidity reasonably ample” and “increasing the support for the real economy,” as well as helping banks support industries damaged by the Covid pandemic, the PBOC said in a separate statement.

The RRR reduction -- the first since April -- was foreshadowed earlier this week by the State Council, China’s cabinet, which called for more efforts to solidify the economic recovery. The central bank has also cut its key interest rates twice this year, with the most recent move in August.

The PBOC’s move comes after significant government actions recently to help the economy, including a rescue package for the property sector and an adjustment of some Covid curbs to reduce the damage to the economy.

However, the growth outlook remains challenging. A recovery in the housing market will likely be slow, while Covid cases have surged to a record high, spurring major cities like Beijing to restrict residents’ movements.

Economists say China will likely face a slow and painful process of attempting to reopen the country, with Nomura Holdings Inc. this week cutting its 2023 economic growth forecast to 4%.

“With Covid flareups proliferating -- prompting renewed restrictions on activity -- and global growth slowing, it won’t be easy going for the economy. Given that outlook, we expect the PBOC to maintain a stance of gradual easing into 2023.”

“Looking ahead to next year, we expect the PBOC to trim the RRR by another 50 bps. It may also cut its one-year medium-term lending facility rate, a key policy interest rate, by 20 bps. We think it would do that in two moves, with the first 10-bp cut in 1Q23.”

The policy easing is in sharp contrast to the US Federal Reserve and other major central banks, which have hiked interest rates this year to combat soaring inflation. Fed officials recently signaled they can slow down their aggressive interest rate hikes going forward, giving the yuan some respite after its sharp depreciation.

The RRR is a way to free up cheap long-term liquidity for banks, allowing them to extend more loans to businesses and consumers. It will save 5.6 billion yuan in funding costs each year for financial institutions eligible to benefit from the cut, according to PBOC.

The move will “moderately lower the funding costs for commercial lenders and encourage credit extension, so as to bring down the borrowing costs by companies and consumers,” said Bruce Pang, chief economist and head of research for Greater China at Jones Lang LaSalle Inc.

The additional liquidity for banks will help reduce their liability costs, which may push them to drop the five-year loan prime rate, a reference for mortgage rates, according to Ming Ming, chief economist at Citic Securities Co.

While economists had been expecting more stimulus from the PBOC, the timing was a surprise after recent cautious statements from the central bank warning of possible inflation risks. In Friday’s statement, the PBOC re-introduced a phrase to use “quantitative and structural” functions of monetary policy tools, which it had dropped in a report published earlier this month.