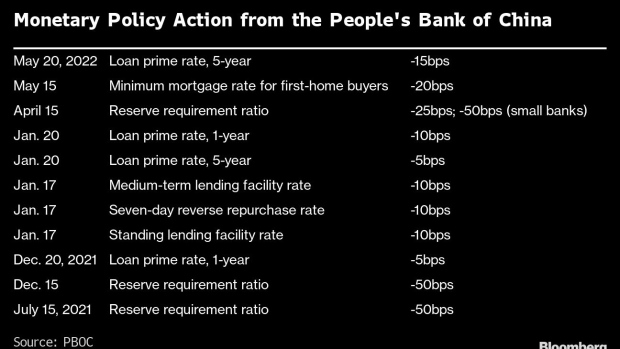 BEIJING, CHINA - MAY 26: A restaurant worker sells food in on the street after inside dining was banned by authorities due to a COVID-19 outbreak, on May 26, 2022 in Beijing, China. China is trying to contain a spike in coronavirus cases in Beijing after hundreds of people tested positive for the virus in recent weeks. Local authorities have initiated mass testing, mandated proof of a negative PCR test within 48 hours to enter many public spaces, closed schools and retail stores, banned gatherings and inside dining in all restaurants, and locked down many neighborhoods in an effort to maintain the country's zero COVID strategy. (Photo by Kevin Frayer/Getty Images) , Photographer: Kevin Frayer/Getty Images AsiaPac

(Bloomberg) -- The People’s Bank of China emphasized it will stabilize jobs and inflation in its quarterly report, reaffirming that monetary policy will provide stronger support to the real economy.

The PBOC will “coordinate work on stabilizing employment and prices,” according to a statement published Wednesday after a meeting of the bank’s monetary policy committee, which was chaired by Governor Yi Gang. Global economic growth is slowing and inflation is running high, while domestic Covid-19 control work is still difficult despite the recent improvement, the board decided at the meeting on June 24.

The central bank will take advantage of a rise in domestic grain supply and stable energy markets to keep prices basically stable, the committee said. It will step up the support for inclusive finance loans to small businesses and support them to stabilize the job situation, according to the statement.

Governor Yi signaled in an interview this week that monetary stimulus would likely focus on boosting credit rather than lowering interest rates, arguing that China’s “real interest rate is pretty low.” The effect of any easing would be constrained by weak loan demand, while the PBOC is limited in what steps it can take by overseas central banks hiking interest rates.

The necessity of doing more to increase employment was made clear by a separate central bank report, which showed that Chinese are more pessimistic about jobs than at anytime in more than two decades, after lockdowns to contain an outbreak of Covid pushed the economy into contraction and put people out of work.

The declines show just how damaging the outbreak over the spring has been to consumer sentiment, with unemployment rates rising and retail sales shrinking from March. While the virus has been brought back under control for now, it will take a long time for the economy to recover and there’s always the threat of future outbreaks.

While the government has announced some loosening to virus control policies over the past day, it’s also made clear that the Covid Zero policy will continue for a lengthy period of time despite the damage to economic activity so far this year. This will only confirm people’s hesitancy to spend and increased desire to save, which could help them survive any income damage from a lockdown.

People’s’ confidence in their future income tumbled to the worst level since the first quarter of 2020, when the Covid pandemic first broke out, according to the survey. Some 58.3% of the respondents said they were more willing to increase savings, up 3.6 percentage points from the the first three months of the year.

China faces challenges in addressing the jump in unemployment this year, with job prospects damaged by the virus and controls as well as the year-long slump in the property industry and the crackdown on sectors like private tutoring and tech. The official jobless rate was 5.9% in May, above the full-year target of “under 5.5%,” while the youth unemployment rate surged to a record 18.4%.

An index measuring overall loan demand tumbled to the lowest level since 2016, according to another PBOC survey of the heads of banks across the country. The central bank is struggling to get companies and households to expand long-term borrowing even as it has guided mortgage and loan rates lower this year.

A gauge measuring the looseness of monetary policy in the eyes of bankers climbed for the second straight quarter, with 40% of the respondents saying policy was “loose,” up 13 percentage point from the previous quarter.

The policy board meeting reiterated that the central bank will step up the implementation of a prudent monetary policy, and make loan growth more stable, and reaffirmed that liquidity will be kept reasonably ample. Premier Li Keqiang said recently that China’s decision to not over-print money is crucial to preventing inflation and reserving room for future policy action.

As well as the actions of the central bank, there will be a lot of attention on the Communist Party’s upcoming Politburo meeting for clues on further policy support. The meeting, usually held in late July, will discuss the country’s economic outlook and strategy.

The central bank interviews 20,000 depositors and about 3,200 bank officials each quarter for the surveys. The surveys asks depositors a series of questions and then assigns a value to their answer, which is then converted into an index. Above 50 means a majority see an improvement in conditions, while below 50 means they see a deterioration.

(Updates with details from quarterly survey of depositors.)