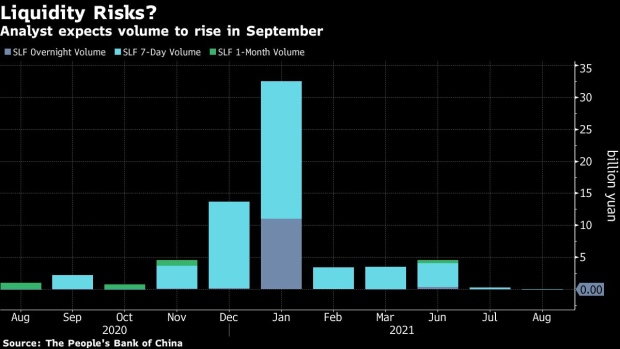 (Bloomberg) -- China’s central bank will push to reform its emergency-funding facility to make it easier for banks to access cash, a move that could help smooth out the volatility in money market rates.

The People’s Bank of China will allow application for loans via the standing lending facility to be done electronically, it said in a statement after a national video conference Thursday, an operational change that would help “stabilize market expectations” and “maintain the smooth operation of money market interest rates.”

The SLF was introduced in 2013, with loans having a maturity of overnight to one month. The rate on the loans is considered the upper bound of China’s interest rate corridor.

“The improvement in the SLF efficiency will help to avoid a liquidity crunch and strengthen the SLF rates’ role as the upper limit of a rate corridor,” said Xing Zhaopeng, senior China strategist at Australia & New Zealand Banking Group Ltd. He expects an increase in liquidity injection to banks via the SLF operation in September.

The change also means there’s a smaller chance of money market rates breaching the SLF rate, he said. There have been times that the seven-day repurchase rate, the short-term borrowing cost of financial institutions, surged beyond the SLF lending rate with the same maturity, indicating banks would rather turn to each other for emergency liquidity.

The central bank said in its statement local PBOC branches should meet the reasonable liquidity needs of local financial institutions in accordance with regulations in a timely manner and effectively guard against liquidity risks.

The PBOC also urged banks to make full use of the additional 300 billion yuan ($46 billion) of re-lending quota to small firms, meet the financing demand of small and micro firms, and accelerate the process of credit extension.

Vice governor Liu Guoqiang made a speech at the conference and representatives from local branches attended.