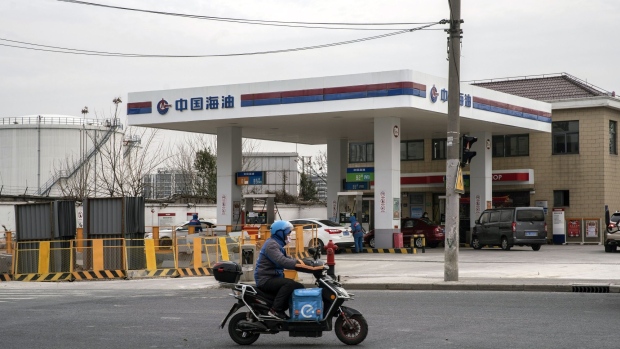 A motorist travels past a Cnooc Ltd. gas station in Shanghai, China, on Thursday, Jan. 7, 2021. China's energy markets are tightening as the economy rebounds and freezing weather grips much of the northern hemisphere, a dynamic that’s likely to be exacerbated by reduced Saudi oil output. Photographer: Qilai Shen/Bloomberg , Bloomberg

(Bloomberg) -- Cnooc Ltd. more than doubled its first half profits from a year ago as China’s biggest offshore driller benefited from sky-high oil and gas prices.

The firm posted 71.9 billion yuan ($10.5 billion) in profits in the first half of the year, more than doubling the 33.3 billion yuan earnings it made in the same period last year, according to an exchange filing. Last month it flagged that net income would be 70.5 billion to 72.5 billion yuan in a preliminary filing.

Among China’s three state-owned oil giants, Cnooc has the most direct exposure to global energy prices because it lacks the massive fuel refining and marketing business of its peers Sinopec and PetroChina Co. Global oil prices were about 60% higher over the first half than the same period on 2021 as Russia’s invasion of Ukraine raised fears of resource scarcity.

Cnooc’s first-half capital spending rose 15% to 41.6 billion yuan, compared to its target of 90 billion to 100 billion yuan for the whole year. The firm is slowly shifting its spending toward renewable energy, which it wants to make up more than half its output by 2050. It plans to spend about 5-10% of its capex budget on clean energy through 2025 before lifting that to 10-15% from 2026 to 2030.