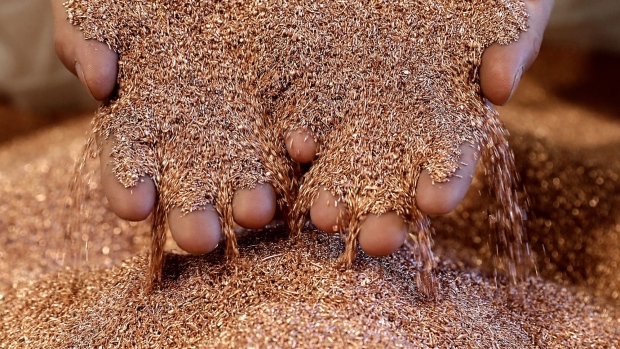 (Bloomberg) -- Commodities in China dropped as a surge in the dollar heaped pressure on markets already plagued by concerns over Chinese growth.

The greenback climbed to a record high across currencies, making China’s massive import requirements for materials, energy and food more expensive. It’s just the latest in a litany of headwinds to the nation’s commodities demand that include the government’s Covid Zero rules, a property crisis, power outages over the summer, and weaker export markets.

China was forced to set the daily reference rate for the yuan weaker than 7 to the dollar for the first time in two years. In an attempt to slow the yuan’s decline, it also raised the risk reserve requirement on foreign exchange sales.

As the obstacles to growth mount, the focus is increasingly turning to what policy support will be offered at the party congress in October. While few are betting that the meeting will herald a significantly more relaxed approach to the virus, measures to prop up the embattled real estate sector are more likely.

Local governments, meanwhile, continue to push ahead with infrastructure developments over the peak season for construction, while the nation’s top economic planning agency once again pledged to front-load investment in the sector, including energy projects.

Solar panels have overtaken wind turbines in the world’s biggest renewables market as manufacturers ramp up output to lead the energy transition. China’s solar capacity rose 1.9% to 349.9 gigawatts in August, surpassing wind, which grew by just 0.2% to 344.5 GW, according to the National Energy Administration.