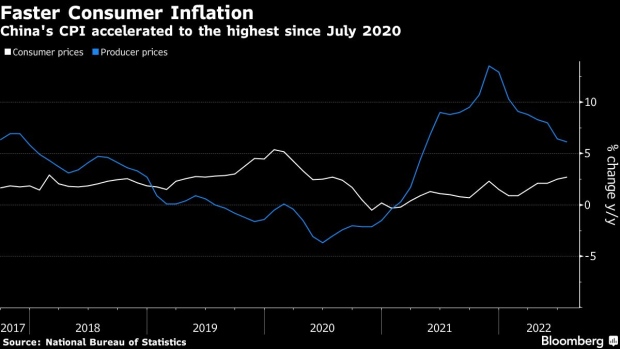 Customers purchase vegetables at a food market in Shanghai, China, on Monday, June 6, 2022. A rally in Chinese pork prices that got underway in mid-March looks set to continue, posing an inflationary threat that may make it tougher to kickstart the economy from its virus-induced slump. Photographer: Qilai Shen/Bloomberg , Bloomberg

The consumer price index rose 2.7% last month from a year earlier as pork prices surged 20.2%, National Bureau of Statistics data showed Wednesday. The pickup in CPI was lower than the 2.9% median estimate in a Bloomberg survey of economists and compares with 2.5% growth in June.

Producer price inflation, meanwhile, slowed to 4.2% in July from 6.1% in June as commodity prices weakened.

In contrast to the US and other major economies, consumer inflation in China has been relatively subdued this year as strict Covid control policies and sporadic outbreaks curbed consumer and business spending. Those virus flare-ups -- along with global headwinds and an ongoing real estate crisis -- have kept China’s economic recovery fragile, with factory activity unexpectedly contracting last month and property sales continuing to shrink.

While rising pork prices are expected to push up CPI this year, core inflation, which excludes the volatile prices of food and energy, remains subdued, slowing to 0.8% in July. That suggests very little demand pressure in the economy to warrant concern from policy makers.

“Inflation will likely rise past 3% in the next two months, due to a low base and the lift from pork prices,” said Bruce Pang, head of research and chief economist at Jones Lang LaSalle Inc. “But core inflation will likely stay benign as domestic demand remains weak. This won’t cause much restriction to the monetary policy.”

Equity benchmarks in China and Hong Kong slumped in the morning session, leading losses in Asia. The yield on the 10-year government bond yield fell 1 basis point to 2.73% while bond futures rose 0.1%.

July’s inflation uptick was largely driven by gains in the price of pork, fresh vegetables and other foods, along with seasonal factors, the NBS said in an accompanying statement, citing senior statistician Dong Lijuan.

Overall food prices rose 6.3% in July from a year ago, with pork prices, a key element in China’s CPI basket, posting the first year-on-year increase since September 2020. Fresh fruits and vegetables surged 16.9% and 12.9%, respectively, from a year ago.

The pickup in China’s headline CPI inflation in July was driven by food prices, not stronger consumers. The sluggish reading on the core CPI shows consumption remains under pressure -- Covid-19 and steps to snuff out any outbreaks continue to restrain households. This will keep a constraint on growth. For the People’s Bank of China, this means it will need to keep a supportive policy stance.

In contrast, the US is expected to report softer headline consumer price inflation for July of 8.7% later Wednesday but a pickup in core CPI. That will continue to put pressure on the Federal Reserve, which has already hiked interest rates four times this year.

The People’s Bank of China will have an opportunity to cut the rate on one-year policy loans to provide more monetary support to the economy next Monday, although most economists expect it to keep the rate unchanged. It could also reduce liquidity by partially rolling over the the 600 billion-yuan of one-year policy loans maturing, the Securities Daily reported Wednesday, citing analysts.

“If we can keep the unemployment rate below 5.5% and the CPI rise stays under 3.5% for the whole year, we can live with a growth rate that is slightly higher or lower than the target, not too low of course,” Premier Li Keqiang said at an event with business leaders hosted by the World Economic Forum last month.

Peiqian Liu, chief China economist at NatWest Group Plc, said there was “limited room for an upside surprise” in core CPI, given how the country’s Covid Zero policies have suppressed consumer demand.

“So with some policy support, there is perhaps room for core CPI to stabilize at its current levels,” she said in an interview with Bloomberg TV.