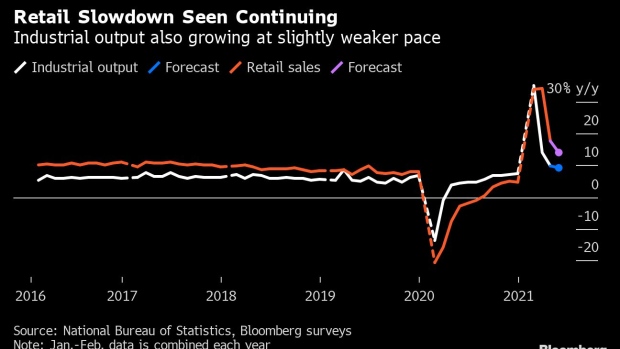 (Bloomberg) -- China’s economy is stabilizing from its record expansion in the first quarter, with analysts watching closely for signs of a more meaningful pickup in consumer spending.

Data due Wednesday will likely show further moderation in activity in May as base effects from last year’s pandemic gradually start to fade. Economists surveyed by Bloomberg predict year-on-year growth in retail sales slowed to 14% from 17.7% in April, while industrial output eased to 9.2%. Fixed-asset investment is expected to have grown 17% in the first five months of the year from the same period in 2020.

The recovery from the pandemic has been led by heavy industry, property and an export boom, with consumer spending remaining the weak link -- and therefore the key to a more sustainable growth outlook. While spending probably continued to pick up in May as vaccine rollouts accelerated and the labor market improved, signs from the latest holiday spending figures suggest consumers are still holding back.

“The weakness in holiday activities reflects an overall bumpy road for consumption, especially consumer services,” Citigroup Inc. economists led by Yu Xiangrong, wrote in a report. “While the labor market condition has fully returned to the pre-Covid-19 level, widening income inequality and a rising debt burden, as well as permanent behavioral changes, appear to be holding back household spending.”

Local virus outbreaks in parts of China have led to a tightening of social distancing rules in some places since mid-May. That affected tourism spending during the recent Dragon Boat Festival long weekend, with revenues about 25% lower than pre-pandemic levels, according to government data. During the Labor Day break in May, the number of travelers rose slightly but spending was still only 77% of the level reached two years ago, according to official figures.

To strip out last year’s pandemic distortions, economists will be watching for the two-year average growth rates. On that basis, retail sales growth slowed to 4.3% in April from 6.3% in March. The unemployment rate is projected to have stayed unchanged at 5.1% in May.

China’s activity data are likely to show a continued recovery in both supply and demand in May. The year-on-year growth rates will face more-challenging bases effects. Production growth will probably hold steady, while investment and retail sales growth may slow. The underlying trends, though, are likely to be solid.

China’s industrial strength likely continued in May, although at a slower pace than the previous month. Upstream industries, like mining and raw material producers, are benefiting from surging commodity prices, while exporters of manufactured goods are still seeing strong demand for their goods.

There are risks that are weighing on the sector though. China is experiencing power shortages in some parts of the country because of surging electricity consumption and drought in the south, which has curbed hydro-power. Some factories in the southern industrial heartland of Guangdong had to shift their operations to off-peak hours, while local media reported closures in southern and eastern provinces of Yunnan, Sichuan and Zhejiang.

Economists expect China’s economy to gradually moderate this year from 8% in the second quarter to 6.2% in the third quarter and 5% by the final three months of the year. Growth is still expected to reach 8.5% for the full year, well above the government’s target of ‘above 6%.’