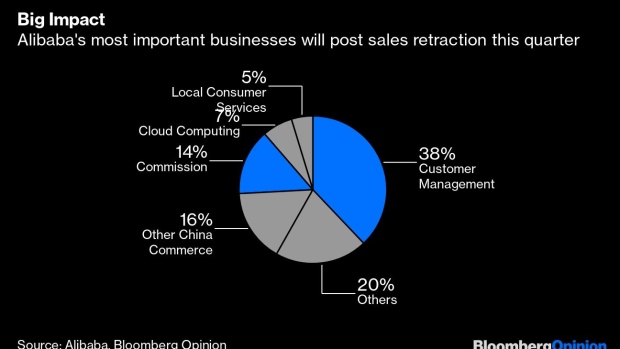 (Bloomberg Opinion) -- Investors looking at Alibaba Group Holding Ltd. earnings on Thursday are rightfully examining the March quarter outlook and parsing every word for clues about how the coronavirus outbreak will impact the Chinese company. It’s not pretty.

Chief Financial Officer Maggie Wu told investors that the company’s China retail and local consumer businesses would be hit hardest. Both will bear the brunt of reduced demand and the challenge of delivering products. Customer management revenue and commissions will most likely decline, she said.This is a huge revelation.

Those two divisions combined accounted for 52.4% of revenue in the December quarter. If their sales fall, China’s largest company could post its first revenue decline on record.(1)It’s also possible that other businesses, such as cloud computing and fresh food delivery, will pick up the slack, but there’s no guarantee.

Chief Executive Officer Daniel Zhang described the epidemic and resulting widespread quarantine as a Black Swan event. The message: This will hurt, but it will be a one-off.

Yet investors ought to examine the December quarter because it gives clues about how the e-commerce giant was faring before the COVID-19 virus appeared on the scene. Although revenue continued to grow at a respectable 38%, that was the slowest in almost four years and the smallest beat against estimates in at least a year. Its earnings-per-share beat was the slimmest in more than a year.

Importantly, its bread-and-butter core commerce business, which accounts for 88% of sales, continues to weaken. This division was propped up by acquired units in the physical retail space. Stripping those out, customer management (advertising) revenue and commissions combined climbed 21%, almost 4 percentage points slower than the prior quarter and 5.5 percentage points less than a year ago. Bear in mind, the December quarter includes Alibaba’s big Nov. 11 Single’s Day bonanza, which is supposed to push revenue skyward. Clearly, this event is losing its luster.

So that was all happening when the coronavirus burst onto the scene.

Among the numerous problems Alibaba faces is a delay in employees returning to work after the Lunar New Year break, which was underway when the outbreak struck. This means that merchants can’t ship orders, leaving a significant number of packages undelivered. Trips made through its travel business have been canceled — with the company offering full refunds — and restaurant bookings are down. Orders for fresh food delivery have increased, though.

Beyond that, the company has to bear the costs of what is best described as being a good corporate citizen. Its fintech business, Ant Financial, is waiving or cutting interest rates on loans, and executives have elected to offer subsidies to delivery personnel. It’s also making direct and indirect donations — including 469 million yuan ($67 million) in supplies it procured from around the world —  and ramping up free services it already offers such as the DingTalk communications app, which is being used in online education and work-from-home situations.

Executives did their best to turn lemons into lemonade. More people are integrating digital technologies into their daily lives — more than 150 million daily health check-ins have been recorded on DingTalk — and Alibaba’s ability to deliver food and supplies at the height of this emergency could make the company even more indispensable in people’s daily lives once the dust settles.

If that optimistic view of the crisis plays out, then Alibaba might bounce back stronger than ever. But investors shouldn’t ignore the fact that the business was already becoming weaker before the Black Swan arrived.