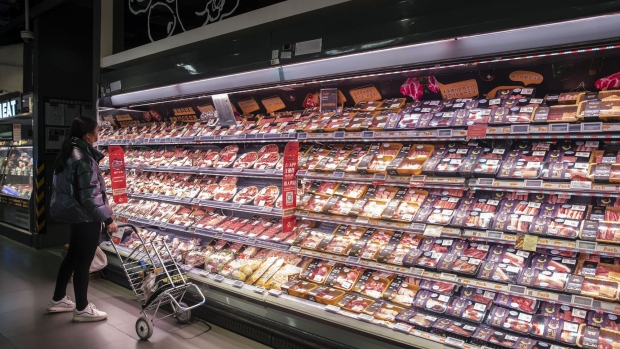 An employee cuts a slab of imported Australian beef for repackaging at an Ole supermarket, operated by China Resources Vanguard Co., in Shanghai, China, on Tuesday, Jan. 19, 2021. Ole pledges to offer a look at the new challenges facing retailers as many Chinese shoppers grow reluctant to buy overseas food products after Covid-19 infections were reported among people handling such items. Photographer: Qilai Shen/Bloomberg , Bloomberg

(Bloomberg) -- The latest Covid-19 resurgence in China is putting imports of frozen food back under intense scrutiny as authorities act on a controversial claim that it’s possible to contract the virus from food packaging.

Cities including Zhengzhou and Haikou will tighten inspection of imported frozen food to prevent virus transmission, according to local media reports. Frozen pork bone and beef ribs originating from the U.K., Brazil and Canada were seized from a hot pot restaurant in Nantong city as the operators couldn’t provide disinfection certificates or nucleic acid test reports.

China has claimed that the virus can persist in conditions found in frozen food and packaging, linking some infections in people to imported goods, and has taken drastic steps to curb the risk. International health authorities have downplayed the likelihood of such transmission, with the World Health Organization and the U.S. Centers for Disease Control and Prevention saying the chance of getting Covid-19 from frozen foods is very low.

Where Are We in Hunting for the Coronavirus’s Origin?: QuickTake

Despite this, China has been testing cold food shipments for virus traces for months; some supermarkets even have separate coolers for imported goods. It’s a debate with global ramifications because China is one of the world’s biggest buyers of many food products, accounting for almost half of the global pork trade. Earlier this year, the mass-testing and disinfection of frozen food caused severe port congestion and long customs clearance delays.

The latest outbreak, which was first detected at Nanjing airport in late July, is linked to the highly-infectious delta variant and has spread to nearly half of China’s 32 provinces within just two weeks. Nanjing has investigated more than 13,000 cold chain food production and business units since the outbreak and tested more than 35,000 samples, all of which were negative for the virus.