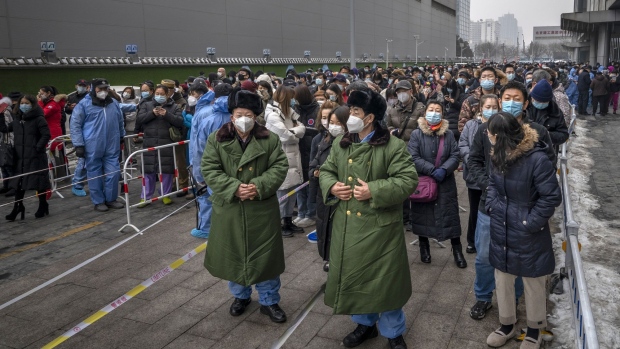 Members of the public wait in line to be tested for Covid-19 in Beijing, on Jan. 24. , Bloomberg

(Bloomberg) -- Ever since Chinese President Xi Jinping’s government quashed a Covid-19 outbreak in the central city of Wuhan roughly two years ago, it has repeatedly sought to blame virus outbreaks on foreign sources. The latest target is international mail.

Worries surged in China last week that overseas parcels could be tainted with coronavirus still potent enough to infect those who came into contact with it. It began with officials saying Beijing’s first omicron infection was a woman who handled a letter from Canada. That led local officials in the southern city of Guangzhou to order all residents who got overseas mail over a four-day period to get tested, and the State Post Bureau to warn people to be extra careful with parcels.

Social-media users immediately began to ridicule the theory, with one doctor writing on the Twitter-like Weibo service that it would become an international joke. The post later disappeared from the doctor’s verified account. Thousands of netizens liked another lengthy missive on a popular verified account belonging to a virologist who explained the science behind why the virus was extremely unlikely to spread via international mail.

China then appeared to change course. He Qinghua, an official at the National Health Commission, told a press briefing over the weekend that experts don’t have enough evidence to say that non-frozen items from abroad were transmitting Covid-19. He added that the coronavirus mainly spreads through close contact between people, echoing the official stance of the World Health Organization.

The abrupt reversal in tone shows the pressures facing Chinese authorities in managing the official narrative as they look to contain mounting omicron outbreaks while also hosting a successful Winter Olympics, which starts next week. China’s propaganda organs have long touted the Communist Party’s handling of the pandemic -- marked by its strategy to eliminate any outbreaks -- as superior to the West, a stance now facing scrutiny as strict lockdowns and mass testing generate more angst among the nation’s 1.4 billion people.

While the National Health Commission had the expertise to refute the parcel claim immediately, it may have waited to see which position had more prominent backers in the party because of China’s “toxic political context” even though the theory was “mercilessly mocked,” said Dominic Meagher, a political scientist and head of Australasia Strategy Group.

“The single-party system makes everything hyper-political because any question about competence goes immediately to the legitimacy of the entire system of rule,” he said.

The consequences for any missteps on the virus are severe. Xi has come down hard on local officials as he looks to avoid the heavy criticism the government received even within the country over its handling of the first outbreak in Wuhan, including accusations that it intentionally withheld information that could’ve saved lives.

His government dismissed top party leaders of Hubei province and its capital, Wuhan, early in the pandemic. That trend has continued ever since, with 26 officials punished in Xi’an over a flareup that prompted the city of 13 million people to completely lock down for a month.

Apart from hitting out at local officials, authorities have regularly pointed the finger overseas -- part of a playbook that extends beyond the virus. During sometimes-violent pro-democracy protests in Hong Kong in 2019, Beijing accused the U.S. of using a “black hand” to make trouble rather than addressing concerns about an erosion of political freedoms.

Days after the WHO declared that Covid-19 was a pandemic in March 2020, Chinese Foreign Ministry spokesman Zhao Lijian said on Twitter that the U.S. army may have had a role in spreading the virus. “Be transparent! Make public your data! US owe us an explanation!” he wrote.

Last summer, as U.S. intelligence agencies prepared a report on the origins of the virus ordered by the Biden administration, the ministry regularly raised questions about American biolabs. A favorite target was Fort Detrick in Maryland, the same U.S. facility that the Soviet Union falsely claimed in the 1980s was the source of the virus causing Aids.

Blaming foreigners for the virus is beneficial in other ways. The strategy suggests that Xi’s government has everything under control and provides a ready excuse for any cases that break through China’s defenses.

It also serves to stoke nationalism among a population burdened by the Covid-zero policy, which has required a litany of sacrifices. Lockdowns have caused food and healthcare shortages like those seen recently in Xi’an and in Tianjin, a port city near the capital.

“Beijing wants its citizens to blame Covid lockdowns on foreigners rather than on the Chinese government itself,” said Neil Thomas, a Washington-based analyst of Chinese politics and foreign policy at Eurasia Group. “Blaming Covid outbreaks on foreign mail is just one more example of the Xi Jinping administration’s concerted effort to use assertive nationalism to boost its public legitimacy.”