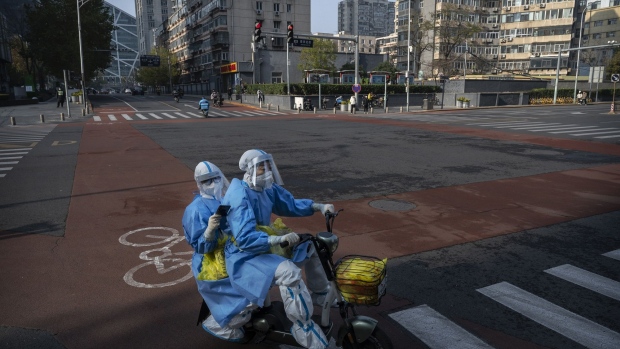 (Bloomberg) -- China’s daily Covid infections climbed to a record high, exceeding the previous peak in April, as it battles an outbreak that has grown since the country adopted a more targeted approach to containing the virus.

The country reported 29,754 new cases for Wednesday, more than the 28,973 infections recorded in mid-April when the financial hub of Shanghai was in the midst of a grueling two-month lockdown that saw residents struggle to access food and medical services.

China’s official figures separately report symptomatic and asymptomatic patients, which can lead to inflated numbers when people are re-classified after developing symptoms. The Bloomberg News tally counts all local cases, regardless of symptoms, and removes the double-counting issue.

The recent surge comes at a critical moment for leaders, who have to decide whether to tolerate some spread of the virus or revert to strict Covid Zero curbs to halt the outbreak at the expense of the economy. Major cities ranging from Beijing to Chongqing and Guangzhou have largely come to a standstill as chains of transmission penetrate apartments, office buildings and shopping malls.

Cities are once again expanding their testing efforts and building makeshift hospitals to quarantine the growing number of people who are infected. Though no city-wide lockdowns have been announced, the widespread restrictions are increasingly paralyzing economic activities, even as authorities pledge to make their responses more targeted and less disruptive.

Zhengzhou, home to Apple Inc.’s largest iPhone manufacturing site, will be largely locked down for five days starting Friday. Residents in high-risk areas will have to stay home, while others are advised not to leave their residences or compounds unless necessary. The order came after hundreds of workers at the plant known as ‘iPhone City’ clashed with security personnel as tensions boiled over following almost a month under tough restrictions.

Beijing has also escalated restrictions as its case tally swelled to 1,611 on Wednesday. More residential compounds across the capital have been temporarily locked down, and many office buildings, shops, and entertainment venues have closed. In Chaoyang, the district where infections are concentrated, schools have switched to online learning and dining-in services at restaurants are halted.

Elsewhere, Shanghai’s Disneyland will reopen on Friday, more than three weeks after it shut due to an infected person being traced to the theme park. The financial hub found 67 new Covid cases.

State media continued a run of commentaries on China’s Covid efforts. The latest, in the People’s Daily, said that pushing for quality growth is the country’s “foremost priority” while preventing the epidemic. At the same time, the nation must avoid excessive restrictions, the Communist Party’s flagship publication said.