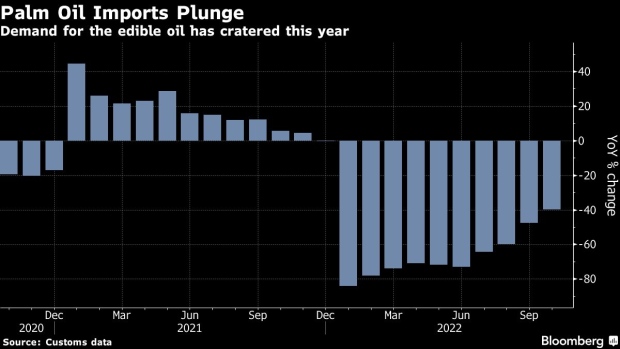 Police officers stand guard during a protest in Beijing, on Nov. 28. , Bloomberg

(Bloomberg) -- The worsening spread of Covid in China could upend food and energy markets this winter by cutting demand at a time when consumption typically rises.

Coal and gas usage is highly contingent on industrial power demand, which will slow if the government continues to impose tighter restrictions that curtail factory activity. Oil markets, meanwhile, will take a hit as fewer people travel by road and air and less fuel is needed to transport goods.

China’s demand for cooking oils, meanwhile, is likely to stay weak as fewer customers frequent restaurants. That will hurt prices for commodities such as palm and soybean oil, especially ahead of the Lunar New Year holiday in January, usually a peak period for travel and consumption.

It’s a bleaker outlook for prices that runs counter to earlier optimism that China was preparing to exit the worst of its virus controls, after the government released a 20-point plan earlier this month refining its Covid Zero policies. At the same time, less industrial demand for power over the cold season will help prevent the outages that have blighted China’s economy during peak periods in recent years -- as long as the virus doesn’t overly disrupt the supply of coal, China’s mainstay fuel.

“The frequent recurrence of Covid outbreaks, and no significant change in the policy to control them, make it hard for demand to improve,” said Wang Xiaoyang, senior analyst with Sinolink Futures. “This will weigh on commodities prices in coming months.”

A record number of virus cases has been accompanied by stunning scenes of public dissent across China, as citizens take issue with a Covid Zero strategy that has kept infections tiny by international standards but caused hardship and weakened the economy. How Beijing responds is in the balance, with all eyes on whether the protests hasten the end, or entrench, President Xi Jinping’s signature policy.

S&P Global Commodity Insights expects Covid Zero to be maintained at least until mid-2023, said Lara Dong, a senior director at the research firm. Others, including Goldman Sachs Group Inc., have said there’s a chance the policy could end sooner, although the exit could be disorderly.

Lockdowns this year have already squeezed demand across a number of key commodities. China is the biggest importer of everything from oil to iron ore and soybeans, and purchases have slowed from the previous year’s levels as the economy has stumbled. The impact on power demand has been particularly marked.

After expanding by 10% in 2021, growth in power demand slowed in the first nine months to 4%, according to the China Electricity Council. S&P’s Dong said she expects demand growth of 4% in the fourth quarter as well, as weaker industrial consumption undercuts the usual increase from heating homes and buildings over the winter.

Demand for natural gas is likely to be worst hit. Consumption, which is largely dependent on imports, is expected to drop this year for the first time in four decades amid soaring global prices and a tepid domestic economy. Cheaper domestic coal has taken up much of the slack as China has raised production to record levels to ensure its energy security.

But Covid outbreaks in major mining regions, especially Shanxi, have crimped coal output in recent months. That’s probably put the high hit earlier this year of 12.89 million tons a day out of reach, although production will “likely still stay above the government’s target of 12 million tons per day to ensure winter demand is met,” said Pat See Khoo, a senior analyst at S&P.

China’s persistence with lockdowns is also expected to depress oil consumption through Chinese New Year. S&P director Fenglei Shi said she expects demand to decline sequentially in both the fourth quarter and first quarter of 2023.

Activity in the metals sector, by contrast, usually softens over winter, which means that intensified virus restrictions are an even bigger blow to demand in a market that’s already contending with elevated prices.

Some metals fabricators are considering bringing forward their Lunar New Year break amid the onset of the virus, said Jiang Hang, head of trading at Yonggang Resources Co.

“This year’s seasonal demand lull may come earlier and last longer,” he said.

--With assistance from Jasmine Ng, Winnie Zhu and Sarah Chen.