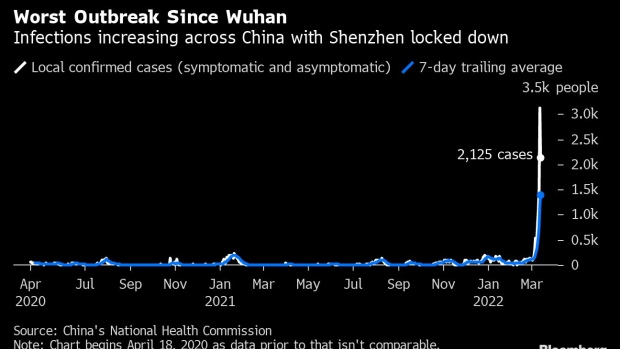 A CMA CGM container ship, right, sits anchored at the Yantian International Container Terminals, operated by CK Hutchison Holdings Ltd.'s Hutchison Port Holdings Trust (HPH Trust), in this aerial photograph taken in Shenzhen, China, on Friday, Sept. 6, 2019. Shenzhen is young, hopeful and looks optimistically toward a future where it can help drive China’s push to dominate the next century through an innovative economy that sidesteps political freedoms. The city also has the centralized control, relentless efficiency and advanced manufacturing that lie at the root of President Xi Jinping’s concept of China’s future greatness. Photographer: Qilai Shen/Bloomberg , Bloomberg News

(Bloomberg) -- Widespread lockdowns in China akin to the measures just taken in the southern technology hub of Shenzhen could affect half of the country’s gross domestic product.

Authorities on Sunday placed Shenzhen’s 17.5 million residents into lockdown for at least a week amid a surge of Covid-19 infections in the city. Shanghai suspended in-person classes and shut intercity bus services, while the northeast industrial center of Changchun, in Jilin -- a city of about 9 million people and accounting for about 11% of China’s total annual car output in 2020 -- was locked down last week.

As cases jump elsewhere, half of China’s GDP and population will be impacted by the latest outbreak, according to economists at Australia & New Zealand Banking Group Ltd. Bloomberg Economics said in a recent note that as of March 9, 14 provinces had high or medium-risk regions, accounting for 54.4% of national GDP.

“More cities may follow the practice of Shenzhen,” said Raymond Yeung, chief economist for Greater China at ANZ, in a note Monday, noting the city’s decision to shut down public transportation and prevent people from leaving or entering. “If the lockdown is extended, China’s economic growth will be significantly affected.”

While Yeung said ANZ is not yet revising its forecast for 2022, they are “wary” of further restrictions. ANZ forecasts GDP growth of 5% for the year, less than the government’s target of about 5.5%.

Should key provinces along the coast and in the northeast follow Shenzhen’s lead and lock down for a week, the economic cost could amount to 0.8 of a percentage point, Yeung said.

Nomura Holdings Inc. said the economic costs of China’s Covid Zero approach are high and market participants may be too optimistic about this year’s growth outlook. The bank expects GDP expansion of 4.3%, well below economists’ consensus forecast of 5.2%.

China is facing rapidly spreading clusters spawned by the highly infectious omicron variant. Daily new cases jumped to more than 3,300 on Saturday from just over 300 a week ago. The surge poses an unprecedented challenge to the country’s Covid Zero strategy, which has so far protected its vast industrial sector but dampened consumption.

While Shenzhen’s GDP is only 2.7% of national output, the city is home to the headquarters of tech giants like Tencent Holdings Ltd. and Huawei Technologies Co. Apple Inc. supplier Foxconn, the Taiwanese company also known as Hon Hai Precision Industry, which has its China headquarters in the area. The company has halted operations in Shenzhen, including at a site that produces iPhones, in response to the lockdown.

Major financial companies, including Ping An Insurance Group Co. and China Merchants Bank Co. are also headquartered in the city. And several foreign banks like UBS Group AG and HSBC Holding have opened branches in the area.

Brokerages and big state banks in the city have suspended in-person services after the lockdown, according to notices and local media reports.

Shenzhen is the second-most important port in China after Shanghai, and processes about 10% of the containers shipped from China in any month. A part of the port was shut for weeks in mid-2021 to contain a local outbreak of Covid, but even then the port was able to ship out almost 2 million containers in June 2021.

Yantian port said in a Monday statement that it is operating normally after Shenzhen tightened virus controls.

While Covid Zero has not led to major economic disruption so far, the restrictions are making the economy “particularly vulnerable to the more contagious omicron variant,” said Louis Kuijs, Asia-Pacific chief economist at S&P Global Ratings.

“Globally, the economic impact of Covid is declining as governments ease restrictions and many move towards a ‘living with Covid’ approach,” Kuijs added. “However, for China, omicron is a key risk for domestic demand, output and, possibly, supply chains.”