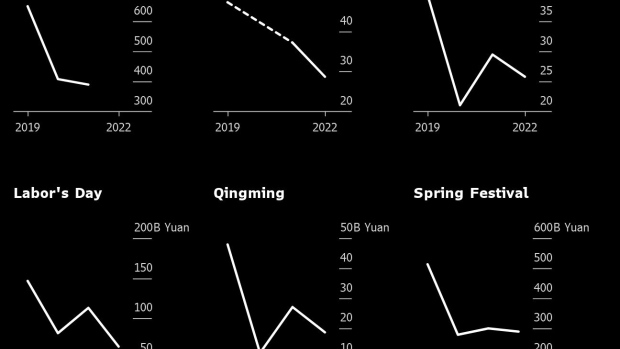 (Bloomberg) -- Chinese holidaymakers are bracing for more disruption during a weeklong break as the government tightens controls to contain Covid outbreaks before the Communist Party’s top leaders meet in Beijing for a crucial political meeting.

Passenger trips by road are expected to plunge by about 30% from a year ago during the National Day break, according to government data. Prices of air tickets for the period are lower compared to last year and travelers are taking shorter journeys, figures from hotel booking sites show. Cinema box office takings are expected to decline by more than 20%.

Also known as the Golden Week, the holiday is typically one of the busiest seasons in the year for shop owners, hotel operators, travel agencies and public transport providers. With holiday spending curbed, consumption will take a knock just as it started to show some signs of a fragile recovery in August.

That would further weigh on the outlook for economic growth, which is seen slowing to just 3.4% this year.

“I don’t expect the data from the upcoming holiday to be much different from the Mid-Autumn holiday,” said Zhang Zhiwei, chief economist at Pinpoint Asset Management Ltd. “Covid related travel restrictions remain quite tight. All eyes are on the Party Congress.”

Stock traders will be watching the spending figures closely to gauge whether the economy is emerging from its trough. The CSI 300 Index has lost more than 14% this quarter, and weaker spending during the holiday may disappoint traders and add to selling pressure.

Health authorities across the country have repeatedly called on residents to minimize travel to other cities and reduce unnecessary gatherings. Many universities, including the elite Peking University and Tsinghua University in Beijing, have shortened the seven-day holiday to just three days, another way of discouraging students from making long-distance travel plans.

Scott Wu, a Chengdu native, said the risk of disruption to schooling is the main reason he’s not making any holiday travel plans with his family this year.

“We won’t be traveling this year during the Golden Week, even though we always used to in past years,” he said. “The biggest reason is because my kids are still in school. If we get locked down in another city, their studies will be disrupted.”

His wife, who is a school teacher, is required to get approval for any travel outside the city and Sichuan province. Parents are also expected to report their children’s whereabouts and their green QR health code in class group chats throughout the National Day holiday, he said.

Cross-province travel is complicated because many places require visitors to take nucleic acid tests more frequently than usual and some ask travelers to not have gatherings for seven days after arrival, according to local media reports.

While the Covid curbs aren’t new, implementation could be tightened this year as officials double down on efforts to ensure stability ahead of the 20th Communist Party congress, which kicks off on Oct. 16. President Xi Jinping is set to secure a third term in office at the twice-a-decade event and top positions will likely be reshuffled.

The Ministry of Transport estimates that daily highway traffic may drop by as much as 24% during the National Day holiday. Air tickets during the period are on average are 5% cheaper than last year, while the average mileage will decrease by 3%, online travel agency Trip.com Group predicted in a report earlier this month.

Fewer people may be interested in going to the cinema as well. The number of blockbusters could be smaller than a year ago and the marketing and distribution cycles of holiday films will be shorter, according to China International Capital Corporation. Analysts including Zhang Xueqing forecast box office takings during the holiday to slide 22% on year to 3.4 billion yuan, with just three in four cinemas in operation.

Some sectors may benefit as holidaymakers plan more staycations. Dongxing Securities Co. analysts including Liu Tiantian say outdoor recreation and camping will continue to be a favored leisure activity after sales of related supplies and services jumped in past holidays this year.