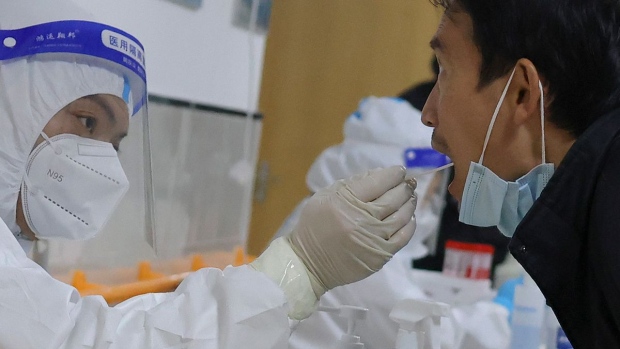 (Bloomberg) -- China’s Covid PCR testing companies are coming under increasing public criticism for profiting off the country’s controversial Covid-Zero strategy, as anger mounts over the onerous rules amid unprecedented protests that broke out over the weekend.

The latest company to come under fire on social network Weibo is Shenzhen Nucleus Gene Technology Co., whose testing subsidiary was named for inconsistencies in their results by the Lanzhou city government in Gansu province last week after staff wrongly recorded negative results. A hashtag referring to Nucleus Gene’s rapid registration of testing labs this year has gone viral. A post that said “Umbrella makers should not be given the authority to decide when it rains,” a broader criticism of how testing companies make money from the pandemic.

As China’s Covid-Zero strategy makes PCR testing a part of everyday life, Nucleus Gene is one of many test providers that have benefited financially. Several testing firms have gone public this year, including Jiangsu CoWin Biotech Co., which saw a profit increase of 68% last quarter. Ten of the largest listed virus-testing firms reported a combined net profit of 16.3 billion yuan ($2.3 billion) as of June 30, according to industry publication OFweek.

Test providers also aren’t the only companies that have come under scrutiny. Pang Pang Xiang (China) Co. Ltd., a Shanghai food distributor that’s planning to list in Hong Kong, touted earnings margins that soared as high as 70% during the city’s bruising two-month lockdown earlier this year. It made a pivot to providing groceries to people stuck in their homes during the outbreak, a move that drew criticism in local media outlets.

Public anger in China boiled over on the weekend as citizens took to the streets and university campuses, venting their anger and frustrations not only toward Covid-Zero but even the Communist Party and President Xi Jinping himself. While resentment toward China’s Covid rules has been simmering for months, the protests were triggered after virus restrictions were blamed for blocking rescue efforts in a deadly fire in Xinjiang’s Urumqi on Thursday.

Even as they report record revenue, testing companies are not immune from the economic toll of China’s Covid-Zero strategy. Many are finding it harder to get paid on time by fiscally squeezed local governments, who are responsible for covering the cost of mass testing. Eight of the largest listed virus-testing firms reported a combined 14.1 billion yuan increase in accounts receivable as of June 30, up 73% from a year earlier, according to Bloomberg calculations. Among these companies, Shanghai Labway Clinical Laboratory Co. saw the biggest jump of 189%.