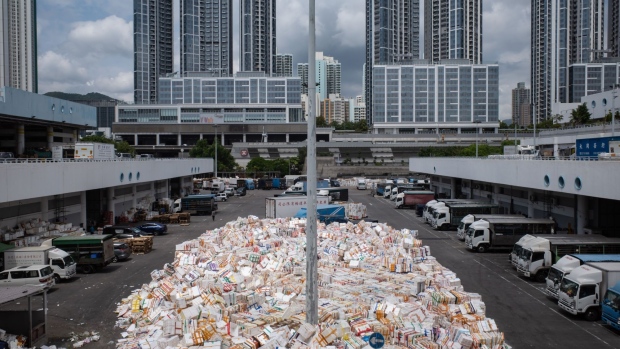 Empty styrofoam containers at a parking lot of a wholesale food market in Hong Kong on April 25. , Getty Images via Bloomberg

(Bloomberg) -- China’s lockdowns and restrictions to battle the nation’s biggest Covid outbreak since the early days of the pandemic are causing a massive increase in garbage in its biggest cities.

Waste related to Covid prevention, including those from hospitals, fever clinics and isolation facilities, has increased 4.5 times to 1,400 tons a day in Shanghai from 308 tons before the current outbreak began in March. The city of 25 million residents has been in lockdown for five weeks, and daily household waste related to Covid reached 3,300 tons this month, compared with only 73 tons a day in February, according to People’s Daily.

Even Hong Kong, which recently suffered through months of milder restrictions like closed schools, bars and gyms, as well as limitations on gatherings and restaurant hours, has faced a growing problem of trash on the streets.

About 373 million people in 45 Chinese cities were under lockdown or partial lockdown last month, according to Nomura Holdings Inc. That’s more than three quarters of the population of the European Union. And while the number of new cases is easing in Shanghai, Beijing and other Chinese cities are tightening restrictions to curb their own outbreaks. That’s caused a jump in food deliveries and online shopping that use far more packaging, putting pressure on China’s already strained waste disposal system.

The country generates hundreds of millions of tons of urban household refuse every day and, since most Chinese families don’t sort their garbage, 97% of it is either buried or incinerated. Most of China’s 654 landfills are full ahead of schedule and its 286 incineration plants are short of capacity.

In Guijie, one of Beijing’s busiest food streets with more than 100 restaurants, there are no customers since Beijing halted dining-in at restaurants in early May. The long queues common before the recent outbreak have been replaced by bands of food-delivery couriers in uniforms and helmets.

“It’s faster to send deliveries because there are basically no cars in the streets,” said Xiao Yao, a food courier for Meituan. “Restaurants don’t need to spend time on people eating in.”

Officials in Beijing and Shanghai have vowed to increase waste transportation and disposal. The Beijing government promised that it will make sure all household waste is cleaned and managed “in time” and “in good standard.” Shanghai has built three new disposal facilities for medical waste, increasing this capacity to 1,500 ton a day.

“Currently our capacity for waste transportation and disposal is enough,” said Xu Li, deputy director of Beijing Municipal Commission of Urban Management. “We will step up inspections to waste collection sites and disposal facilities, and solve any problems in time.”

“In the long term, China needs to work on building a system in which those who produce waste, both enterprises and individuals, need to pay for waste disposal and shoulder more responsibilities,” said Tang Damin, a project manager with Greenpeace East Asia.