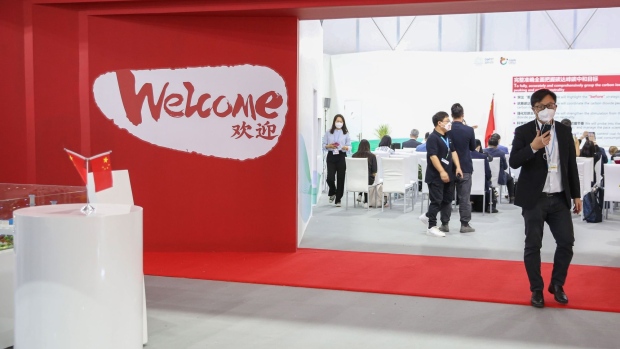 A demonstrator holds a blank sign, a common act of defiance, during a protest in Beijing on Nov. 28. Source: Bloomberg , Bloomberg

(Bloomberg) -- Frustration with China’s Covid Zero policy is coming to a head, as lockdowns, testing and other restrictions spur historic protests across the country. On the ground, the country’s strict Covid controls are also playing out in another realm: grinding some grassroots climate action to a halt.

Environmentalists in and outside China say Covid Zero has made them extremely wary of travel, cutting off much-needed in-person interaction and, in one case, hamstringing a crucial international negotiation on biodiversity. With researchers and scientists stranded at home, many climate projects are on pause, potentially slowing the country’s ability to reduce greenhouse gas emissions and move forward on adaptation. Advocates worry that as urgency increases and climate conversations progress around the world, China risks being left out — or even left behind.

“It’s a scary time when you think about concerns over decarbonization,” said Jennifer Turner, director of the China Environment Forum at Washington DC-based think tank Wilson Center. “Climate action needs to be much bigger now. The world can’t wait.”

To hear Beijing tell it, all is well on China’s climate front. At COP27 in Egypt earlier this month, the country said it had developed a draft plan to curb methane emissions; that same week, Chinese president Xi Jinping and US president Joe Biden had their first in-person meeting since Biden took office, after which the two countries confirmed a return to climate collaboration. China has also publicly reaffirmed its pledges to reach peak domestic greenhouse gas emissions by 2030 and become carbon-neutral by 2060.

But strain was clear at Sharm El-Sheikh, too. China’s COP27 pavilion handed out Covid face masks at its entrance (alongside copies of Xi’s books on governance and diplomacy), and was among the only pavilions  to refuse un-masked visitors entry. While the country sent an official delegation of more than 50 people to Egypt, Chinese climate advocates looking to travel to COP27 on their own faced a gauntlet of logistics and expenses.

One Beijing-based environmentalist rushed to fundraise ahead of her trip: China’s tight travel controls and days-long hotel quarantine requirements had made the cost of attending exorbitant. “Many Chinese NGOs wanted to attend COP but they couldn’t afford it,” she said. The environmentalist, like many others interviewed for the story, spoke on the condition of anonymity to avoid repercussions from criticizing the Chinese government.

The cost and complexity of travel is also hurting more routine knowledge-sharing. A scientist who works at a university near Shanghai said he used to travel abroad as frequently as 14 times a year: brainstorming with international experts, visiting state-of-the-art emissions reduction projects and bringing the best climate-friendly practices back to his country. Now he hasn’t made a single trip out of China since 2020, citing concerns over mandatory quarantine upon return and uncertainties around rapidly shifting virus-control measures.

Worse, the scientist said, is that at least five climate-mitigation projects he is involved in have been delayed or scrapped due to Covid restrictions. One such project, a partnership with researchers in Europe, aimed to test different solutions for soil degradation on Chinese farmland, a problem that both hampers food production and releases enormous amounts of carbon dioxide. But after three years, their experiments still haven’t started because no one is able to access the research site. “We simply can’t do our field work on Zoom,” the scientist said.

China’s Ministry of Ecology and Environment didn’t respond to a faxed inquiry seeking comment. Repeated phone calls to the ministry’s press office also went unanswered as the Chinese capital itself is battling Covid with widespread lockdowns.

In the three years since the first Covid-19 cases emerged in central China’s Wuhan city, Xi has remained doggedly focused on eliminating the virus from a nation of 1.4 billion. China still carries out stringent movement restrictions in Covid hotspots and requires near-daily testing for millions of people; centralized quarantine is mandatory for anyone who tests positive or arrives from abroad. The government, which has reported fewer than 6,000 Covid fatalities on the mainland, estimates its strategy has avoided 1 million deaths and 50 million cases.

But it’s hard to discern what would trigger a drawdown of Covid Zero, or when one is actually happening. Earlier this month, for example, the central government issued less restrictive quarantine guidance, but local authorities struggled to find alternative containment options and lockdowns actually increased.

The risk of ending up under lockdown has many thinking twice before traveling to China. Once a popular destination for hosting environmental workshops, Beijing has lost its allure for global climate experts, said one researcher who works at an international NGO in the city. In the pre-pandemic era, at least one climate dialogue took place in the Chinese capital in any given quarter, he said; this year, no international forums were hosted in-person, and visitors shied away.

Indeed, the UN Biodiversity Conference — a global summit aimed at striking a deal to safeguard nature amid a changing climate — had to change its venue from China to Canada after repeated delays, citing the “pandemic control situation in and outside the country.” Initial attempts to negotiate virtually were stymied by time differences and unstable internet connections. As a result, countries are still behind in agreeing on, let alone implementing, a plan that could halt and reverse biodiversity losses.

Climate progress often hinges on agreement between China and the US. It was cooperation between the two largest emitters in 2014 that helped set the stage for the landmark Paris Agreement the following year. With tensions between China and the West escalating over the past few years, that type of collaboration became increasingly difficult.

One European energy analyst recalled reading a conference memo last year from a Chinese association that openly celebrated the lack of foreigners in attendance. An American researcher said she was advised by her Chinese counterparts to meet off-campus in order to avoid unwanted attention. Both requested anonymity to speak freely about a politically sensitive topic.

Then in August, climate talks were formally suspended after House Speaker Nancy Pelosi paid a visit to Taiwan — a self-governing island that China claims as territory — and didn’t resume until the November meeting between Biden and Xi. The on-again off-again hostility has had a chilling effect on climate advocates from both sides, according to international experts with ongoing partnerships in the country.

By severely limiting in-person interactions critical for trust-building, Covid Zero is “adding insult to injury” in already troubled international collaborations, said Barbara Finamore, a senior visiting research fellow at Oxford Institute for Energy Studies, who specializes in China’s energy and climate policy. The country may be charging ahead with wind turbines, solar panels and electric vehicles, but “it is not going to meet its net zero goal without international collaboration and acceleration,” Finamore said.

Climate advocates are far from the only critics of China’s strict adherence to Covid Zero; others point to its impact on the country’s economy, and its use as a tool of social control. But the climate considerations are taking on increased urgency as current plans to cut greenhouse gas emissions prove insufficient to halt warming at 1.5C above pre-industrial levels. There’s also a substantial risk that other concerns will take precedence over climate ambitions even if China does loosen restrictions — in particular the country’s battered economy, which is expected to dramatically undershoot an official growth target of 5.5% this year.

For now, economic slowdown appears to have helped the climate. As Covid-induced restrictions on travel and business operations suppress energy demand, China’s emissions are on course to drop roughly 1% in 2022 from a year ago. But experts say that decline may be short-lived (as it was for other countries). November already saw one high-profile climate setback, when Chinese policymakers pushed back a deadline for peaking carbon emissions from building materials to 2030 from a 2025 timeline proposed by its own building industry.

“China’s Zero Covid policy is a disruption of the whole economy,” said Turner at the Wilson Center. “As the economy worsens, decarbonization starts looking really impossible.”

The Beijing-based NGO researcher laments that he no longer has the opportunity to talk about climate change with international visitors over tea. But his deeper worry is that the longer China is mired in domestic challenges, the more the climate will lose out. As the country normalizes its isolation, he said, “I fear we’ll be out of sight, out of mind.”