A rout in Chinese shares in the crosshairs of Beijing’s regulatory crackdown extended into the bond and currency markets Tuesday as unverified rumors swirled that U.S. funds are offloading China and Hong Kong assets.

The speculation, which included talk that the U.S. may restrict investments in China and Hong Kong, circulated among traders in late afternoon in Asia, spurring a renewed bout of selling. The Hang Seng Tech Index, a gauge of many Hong Kong-listed Chinese stocks, plunged as much as 10 per cent, while the yuan slid to its weakest since April against the dollar and even Chinese bonds were dumped.

The drastic moves underscore how fragile investor confidence has become after a monthslong regulatory onslaught by Beijing that only seems to be getting worse. Traders fear the latest crackdown on the nation’s education, food delivery and property sectors could expand to other industries such as health care, as China looks to tighten its grip on Big Tech and reduce the wealth cap.

“The spread of declines from the Chinese equities space into the yuan signals that the concerns over regulatory risk in China might have taken a turn for the worst,” said Terence Wu, foreign-exchange strategist at Oversea-Chinese Banking Corp. in Singapore. 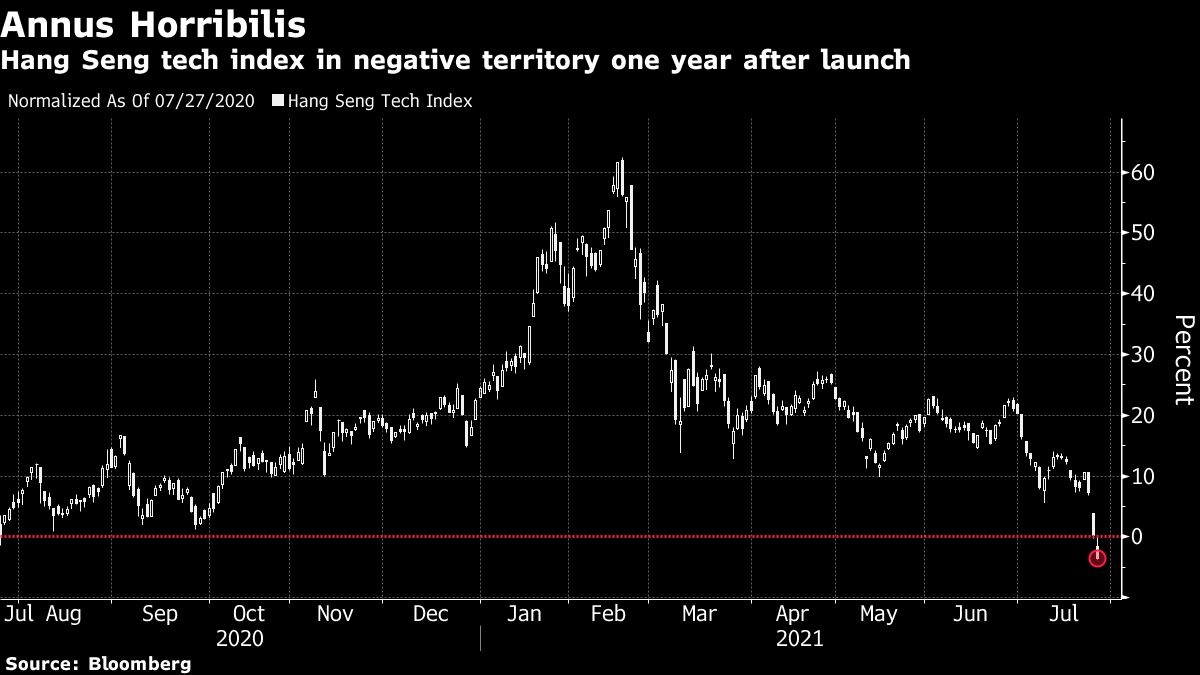 Treasuries climbed with the greenback and the yen as investors sought havens. The yield on China’s most actively traded 10-year government notes rose seven basis points to 2.94 per cent, the most in a year. The offshore yuan fell as much as 0.6 per cent to 6.52 per dollar and one-month volatility in the currency pair posted the biggest jump since May.

“Although we can’t verify if it’s true or not, the market fears that foreign capital will flow out from the Chinese stock market and bond market on a large scale, so sentiment is badly hurt,” Li Kunkun, a trader from Guoyuan Securities Co. said of the speculation.

The selloff has spread into the offshore Chinese credit market as well. High-yield notes are down as much as 5 cents on the dollar, while investment-grade bond spreads widened by another 10 to 15 basis points.

Investors in some of China’s most vibrant sectors -- from technology to education -- have found themselves in the firing line this month as Beijing attempts to rein in private enterprises it blames for exacerbating inequality, increasing financial risk and challenging the government’s authority. A seeming acceptance of short-term pain for stockholders in pursuit of China’s longer-term socialist goals is a rude awakening investors.

“The key concern now is whether regulators will do more and expand the crackdown to other sectors,” said Daniel So, strategist at CMB International Securities Ltd. “The regulatory concerns will be the key overhang to the market for the second half.”

So added that it was too soon in his opinion for investors to “bottom fish.” 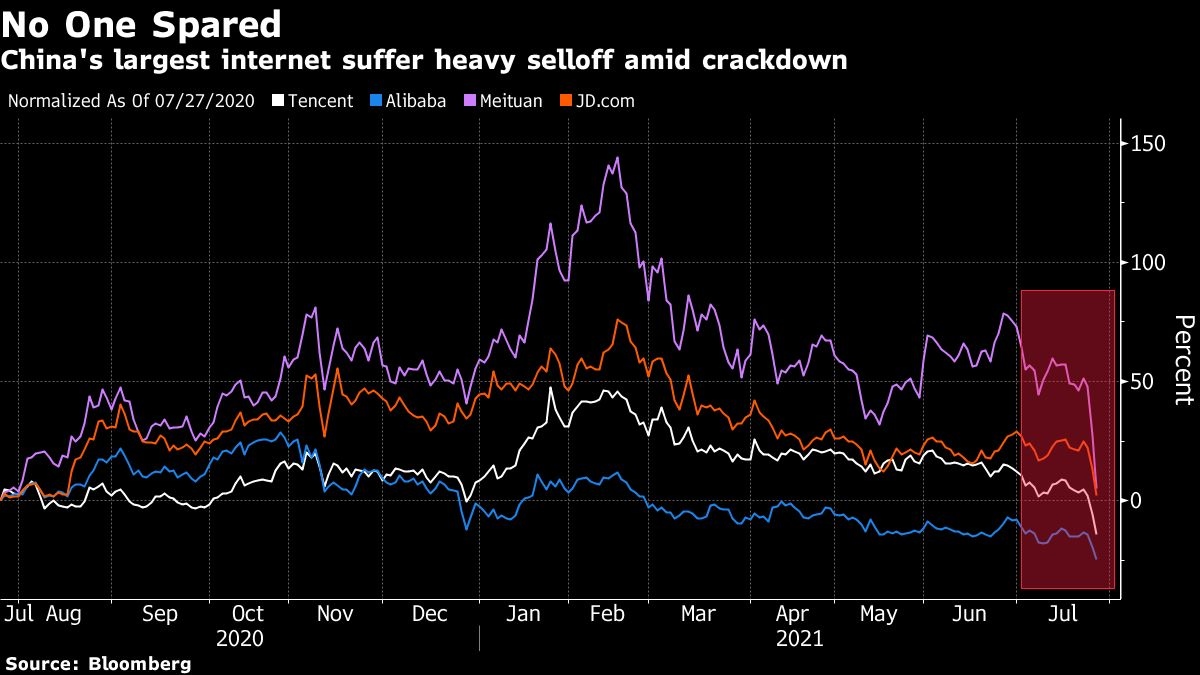 Technology and education shares retreated once again Tuesday while property stocks also fell. Tencent Holdings Ltd. slumped 9 per cent, most in about a decade, after the company’s music arm gave up exclusive streaming rights and was hit with fines. Meituan fell as much as 18 per cent, its biggest decline ever, as investors digested new rules on online food platforms.

Turnover on Hong Kong’s main equity board reached a record high of HKUS$361 billion (US$46 billion). The Hang Seng Index slid 4.2 per cent, taking its two-day loss to 8.2 per cent, the most since the global financial crisis.

“There is no anchor for us to justify the stock valuations now given the regulation uncertainties,” said Dai Ming, a Shanghai-based fund manager at Huichen Asset Management. “In the past, the market was expecting normal regulations on certain sectors, but now it looks like the government can even tolerate killing a whole industry or some leading companies when it’s needed.”