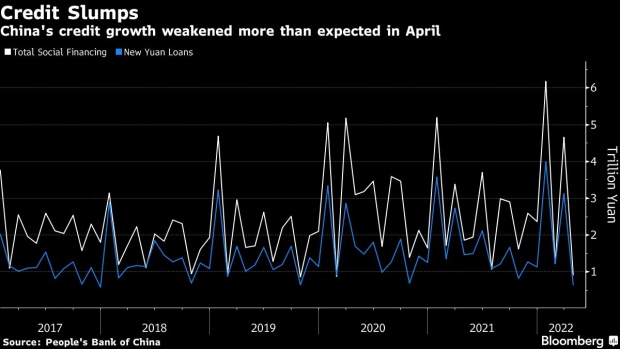 The sharp slowdown in yuan loans came as “the impact of the outbreak on the economy became clearer, while a shortage of key materials and rising productions costs added to the woes,” the PBOC said in a separate statement accompanying the release. Companies, especially small businesses, are facing greater challenges and their “effective funding demand dropped sharply.”

China’s economy took a heavy hit in April as authorities deployed widespread lockdown measures to contain Covid, with manufacturing and services activity, as well as exports, all slowing sharply. Credit expansion has struggled to pick up significantly so far this year, though many economists expect an acceleration in the coming months to drive faster growth.

In a sign of weak credit demand, lenders have aggressively been buying and selling commercial paper with each other. That drove the interest rate on transferring bankers’ acceptances maturing in one month to near-zero levels at the end of April.

The People’s Bank of China has urged banks to increase lending to sectors hurt by Covid, and recently introduced several new relending programs to provide cheap funding for loans to targeted areas. The central bank has also loosened some of the financing restrictions for certain property developers.

Deputy Governor Chen Yulu said Thursday the central bank will continue to stabilize overall credit, after pledging over the weekend to support smaller lenders in the sale of perpetual bonds to help them increase their lending capability.