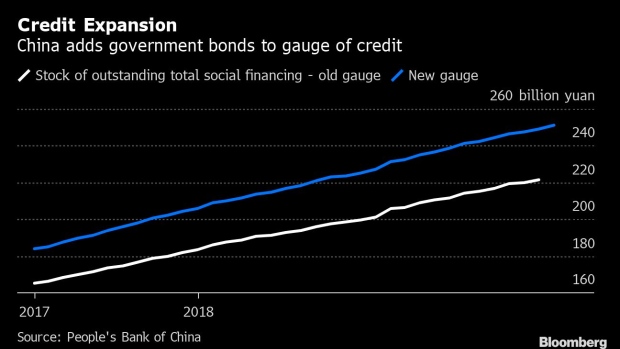 Tourists stand across from a sign for the 70th anniversary of the People's Republic of China celebrations in Shanghai, China, on Tuesday, Oct. 1, 2019. President Xi Jinping declared that no force could stop China’s rise, exuding confidence during a key anniversary as he faced unprecedented challenges from protesters in Hong Kong and Donald Trump’s trade war. Photographer: Qilai Shen/Bloomberg , Bloomberg

China’s overall credit growth held up in December, according to a reworked gauge of aggregate financing released by the People’s Bank of China.

The stock of outstanding aggregate financing expanded by 10.7% in the month, the same pace as in November, the central bank said Thursday. The previous total financing measure was adjusted to include sovereign and local government debt, the PBOC said. The growth rate refers to an adjusted historical series for the purposes of comparison.

--With assistance from Miao Han and Tomoko Sato.

To contact Bloomberg News staff for this story: Yinan Zhao in Beijing at yzhao300@bloomberg.net