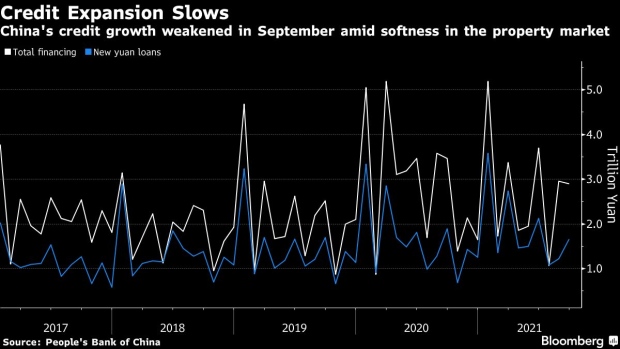 (Bloomberg) -- China’s credit growth slowed in September, as weakness in the property market amid the Evergrande crisis weighed on financing and lending activities, despite the central bank’s call to stabilize credit expansion.

The central bank reiterated last month that overall credit growth will become more stable to keep the macro leverage ratio steady, after credit expansion slowed significantly this year in part due to last year’s high base. The PBOC also urged financial institutions to help local governments stabilize the rapidly cooling housing market and make mortgages easier to get for some homebuyers, in a sign that regulators are trying to ringfence the fallout of China Evergrande Group’s debt crisis.

The slowing economic recovery from the pandemic is also reflected in weakening borrowing demand. Overall loan demand declined for the second straight quarter in the June-to-September period to the lowest level since the first quarter of 2020, according to a gauge compiled by the PBOC based on a survey on 3,200 banks across the country.