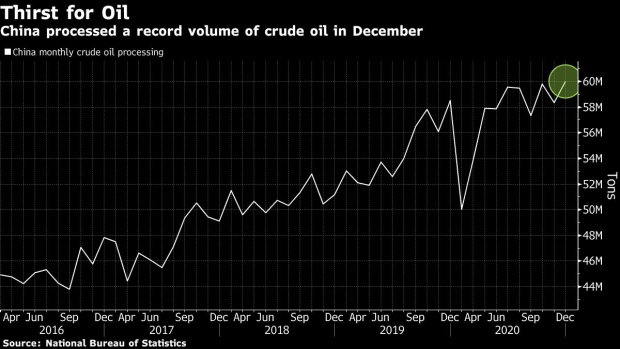 Oil storage tanks are seen in this aerial photograph taken on the outskirts of Ningbo, Zhejiang Province, China, on Wednesday, April 22, 2020. China's top leaders softened their tone on the importance of reaching specific growth targets this year during the latest Politburo meeting on April 17, saying the nation is facing "unprecedented" economic difficulty and signaling that more stimulus was in the works. Photographer: Qilai Shen/Bloomberg , Sharon Cho

(Bloomberg) -- China’s crude stockpiles fell to the lowest in almost a year amid a global drawdown in inventories that’s being driven by a tighter supply-demand balance and higher costs to hoard oil.

Inventories capped a seventh weekly decline last week, sliding to 990 million barrels, the least since February 2020, according to market intelligence firm Kayrros. While a resurgent virus and lockdowns in parts of the country have raised concerns about a near-term demand hit, an overall improvement in domestic travel compared with last year is contributing to the recovery.

Shrinking Chinese stockpiles are following a global trend, with OPEC+ signaling on Tuesday that it expects to drain an oil surplus by the middle of the year. Timespreads for global benchmark Brent are in a bullish structure known as backwardation -- where prompt crude is pricier than later shipments, making it unattractive to hoard cargoes and profit from delayed sales. Tightening supply comes as Goldman Sachs Group Inc. sees worldwide demand reaching pre-virus levels of 100 million barrels a day by August.

Stockpiling in China has leveled off in recent months, with higher oil prices and limits on storage capacity the main factors driving the decline, Kieran Clancy, assistant commodities economist at Capital Economics Ltd., said in a note. Crude purchases for stockpiling in 2021 are likely to be far lower given tighter storage, while prices are unlikely to revisit the lows of last year, he said.

Brent’s prompt timespread was 26 cents a barrel in backwardation, compared with a 7-cent contango at the start of the year.

China -- which was the first country to recover from the pandemic -- reduced its crude inventories by a record in December as the nation imported less and as it processed its biggest ever volume of oil, Bloomberg calculations based on government data showed. Stockpiles hit a peak of about 1 billion barrels in September, said Kayrros, which analyzes satellite data.

Before the coronavirus swept through the region and wiped out consumption, stockpiles at China’s 190 terminals tracked by Kayrros were at 856 million barrels in February of last year, according to the company. Inventories held around 850 million barrels throughout 2019, the company said.