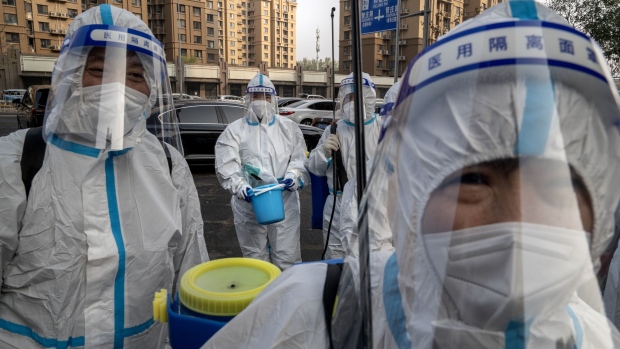 Workers in protective gear at a neighborhood placed under lockdown due to Covid-19 in Beijing, China, on Thursday, Nov. 10, 2022. Chinese stocks dropped as the nation increased Covid restrictions to curb an outbreak in a key manufacturing hub, dampening hopes of a reopening that have triggered a rally this month. Bloomberg , Bloomberg

(Bloomberg) -- China’s refinement of rules to prevent the spread of Covid-19 are set to further boost markets and optimism about the economy, even as the nation reported the pace of infection by the virus accelerated over the weekend.

Cities have reduced mass Covid testing and released people from quarantine camps, according to the new guidelines announced last week, with further changes to come in small steps, officials said at a Saturday briefing on the policy adjustment.

The changes, which include banning local officials from overzealous lockdowns, come from “a better understanding of the virus, and better research and development of vaccines,” deputy head of the National Health Commission Lei Haichao said on Saturday.

Optimism that the country’s notorious Covid Zero policy might be relaxed has already fueled a market rally that sent a gauge of Chinese shares in Hong Kong up 17% in the past two weeks. The Hang Seng China Enterprises Index has now erased losses suffered in the immediate wake of the Communist Party congress, swinging from one of the world’s worst-performing stock gauges to among the best.

Yet, China reported another 14,288 new local Covid cases on Saturday, up from a nationwide tally of 11,323 on Friday. Daily cases have stayed above 10,000 since breaching that level last week for the first time since April. Guangdong, Henan, Beijing, Chongqing and Inner Mongolia remain the provinces or municipalities with the most outbreaks.

“The current Covid outbreak may flare up further in the winter season due to eased Covid restrictions,” UBS Group AG economists led by Wang Tao wrote in a report. “It will be more challenging for the government to manage the Covid situation, in the case new Covid cases jump to dozens of thousands or even higher, which may force China to adjust the Covid policy furthermore.”

UBS is maintaining its expectation of subdued growth in the current quarter and next, before a “notable rebound” from the second quarter.

The scope and degree of loosening remain unclear following the new rules, especially in cities where the number of cases is persistently high. During a meeting on virus controls in Chongqing, which reported 1,817 new cases Saturday, Party Secretary Chen Min’er reiterated tasks to minimize movement and gatherings and step up testing capacities to prevent further spread, according to a local media report.

In another sign of caution, the West Bund art and design fair in Shanghai has been suspended on health concerns, according to the organizer’s WeChat account.

“There is a high risk that fine-tuning efforts will be offset by local officials implementing further tightening measures,” Nomura economists led by Ting Lu wrote on Friday. “Covid case numbers may rise further after the recent surge, so de facto lockdowns maybe be tougher than de jure lockdowns, as local officials still believe their performance is determined by avoiding massive infections.”

The Group of 20 nations, meeting this week in Bali for an annual summit, has raised an initial $1.4 billion for a global pandemic health fund to help avoid a repeat of the Covid-19 pandemic, which killed more than 6.6 million people and hobbled the world economy.

The World Bank will manage the fund to help low- and middle-income countries prevent and address future pandemics, drawing commitments from more than 20 country donors, the Bill & Melinda Gates Foundation and the Rockefeller Foundation, among others.

“The amount that has so far been accumulated is just the starting figure,” said Sri Mulyani Indrawati, finance minister of Indonesia, the host nation and head of this year’s G-20 summit. “The estimated need is up to $31 billion, but this will not be the one and only instrument related to health system preparedness.”

(Updates with details throughout on stocks, vaccines and G-20 fund.)