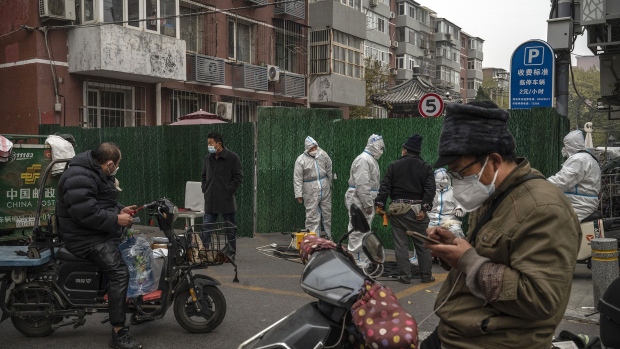 (Bloomberg) -- China’s daily Covid infections broke through 30,000 for the first time ever as officials struggle to contain outbreaks that have triggered a growing number of restrictions across the country’s most important cities.

There were 31,987 new infections reported for Thursday, up from Wednesday’s record of 29,754. The southern city of Guangzhou reported more than 7,500, while cases in the metropolis of Chongqing topped 6,000. The capital, Beijing, saw daily infections exceed 1,800 with the record tally and lockdown-like restrictions sparking panic buying in parts of the capital.

Rising infections across the country are challenging Chinese authorities who want to shift away from city-wide lockdowns to more targeted measures that are less disruptive to residents and businesses. But after initially easing off on testing and movement restrictions -- in line with a new 20-point virus playbook issued by Beijing -- officials in some places are again imposing mass testing orders and lockdowns as they strive to meet the overriding objective of suppressing Covid.

That’s meant instead of issuing explicit orders, major cities are locking down apartment block by apartment block and imposing other under-the-radar curbs. In Beijing supermarket delivery apps are being overwhelmed after residents across Chaoyang, its biggest district, were told not to leave their homes unless necessary. Grocery outlets in the district are also no longer taking orders.

Schools in a number of Beijing districts have been shut, with students switching to online learning. And anyone entering the capital is required to provide a negative PCR test result taken in the previous 48 hours before entering public venues or going on buses.

Zhengzhou, home to Apple Inc.’s largest iPhone manufacturing site, will be largely locked down for five days starting Friday. The order came after hundreds of workers at the plant known as ‘iPhone City’ clashed with security personnel as tensions boiled over following almost a month under tough restrictions.

Elsewhere, Guangzhou won’t be put under so-called static management and there aren’t plans for a lockdown, a local government official said at a briefing on Friday.

Nanjing, northwest of Shanghai, announced on its official WeChat account that it plans to mass test the city for five days from Nov. 26. People will also need a negative Covid test from within 24 hours to enter government agencies and residential compounds, and a 48-hour test for public transport. Everyone arriving in the city needs to get tested within 12 hours of their arrival, and must have three tests in three days. Its plans are in line with the 20-measure Covid playbook, it said.

--With assistance from Phila Siu, Claire Che and Shikhar Balwani.