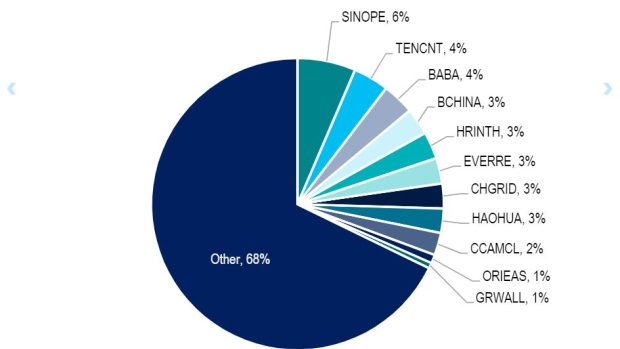 Breakdown of outstanding onshore bonds, in trillions of yuan. 2021 data is as of March 31. , WIND, JPMorgan, Bloomberg.

One of China’s most prolific debt issuers hasn’t sold a single dollar bond in 17 months, the longest dry spell since 2013. An investment grade-rated conglomerate mostly owned by the government is facing a cash crunch in a test of state support. Analysts at UBS Group AG and Goldman Sachs Group Inc. now say the notion of ‘too big to fail’ no longer applies in China as defaults this year exceed $23 billion, a record pace.

Beijing is taking advantage of a strengthening economy and stable financial markets to toughen up its corporate sector. The result is a repricing of risk that should discourage the kind of reckless debt-fueled expansion that inflated some companies to a dangerous size. The spawning of such bloated empires created a threat to the financial system as well as a challenge to President Xi Jinping’s grip on power.

The danger for Xi is that smashing investor faith in government guarantees triggers precisely the kind of crisis he’s trying to avoid. It’s a dilemma that has frustrated Chinese leaders for decades: Ending moral hazard for indebted giants like China Huarong Asset Management Co. and China Evergrande Group would make the financial system more resilient over the long run, but a major default would cause significant short-term pain.

“The government has grown more comfortable with defaults, even important regional state firms, but Huarong and Evergrande present much bigger and more systemic challenges,” said Jeffrey Chwieroth, a professor of international political economy at the London School of Economics and co-investigator at the Systemic Risk Centre. “Deleveraging and eliminating the prevalence of government guarantees may induce undesirable consequences and market panic.”

For the Communist Party, which celebrates its centenary next week, inaction is no longer an option. Officials are repeatedly warning of bubble risks after last year’s monetary and fiscal stimulus pushed economic leverage to a record. The shift was visible in May’s credit data, which showed corporate bond issuance contracting by the most in four years.

Issues stemming from over-leveraged conglomerates are mounting. HNA Group Co., a little-known airline operator that grew into a sprawling giant before collapsing, faces some 1.2 trillion yuan ($185 billion) in claims from creditors, Bloomberg News reported this month. The group spent more than $40 billion on acquisitions across six continents from 2016.

One of China’s biggest defaulters last year was Tsinghua Unigroup Co., which had aspirations to be the nation’s first giant in the global semiconductor industry and once planned a $23 billion bid for U.S. memory-chip giant Micron Technology Inc.

These firms were in many ways emblematic of the way China grew in the years after the global financial crisis. Authorities unleashed a stimulus blitz that fueled a heady economic expansion through binging on credit. Concern over the scale of China’s resulting debt mountain and the possibility of a “Minsky moment” prompted Xi to launch a deleveraging campaign in 2017, before shelving it during the trade war with the U.S.

With China’s real estate sector accounting for about 29% of economic output, property developers like Evergrande are particularly affected by Xi’s fresh drive to cut debt. The firm, which was just cut further into junk by Fitch Ratings, has been trying to reduce its $100 billion burden with asset sales after it failed a regulatory limit on leverage. It hasn’t sold a dollar bond since January 2020.

Investors remain worried over a potential debt restructuring at Huarong after it failed to release its 2020 earnings in March. Beijing’s silence over its plans for the company -- majority-owned by the finance ministry -- has left some of its longer-dated bonds trading at stressed levels. The company’s former chairman, who led the firm’s wayward expansion before his arrest in 2018, was executed this year on bribery charges. Huarong and its affiliates have $39.8 billion of debt outstanding.

Companies are under more scrutiny than ever as Xi enters a crucial period in his rule. China’s leader has in the past year doubled down on perceived threats to the Communist Party ahead of a 2022 leadership shuffle that could see him hold on to the presidency for a third term. Beijing has increased regulation of corporate giants like Alibaba Group Holding Ltd. and Tencent Holdings Ltd., and forced high-profile entrepreneurs like Jack Ma and Meituan’s Wang Xing to lay low.

State-owned enterprises aren’t immune. SOEs and other non-private corporates accounted for 54% of the value of onshore defaults in the first four months of the year, according to JPMorgan Chase & Co.

Evidence of broader market contagion has been relatively limited. Investment-grade dollar bond spreads over respective government bonds have tightened since blowing up to a nine-month high in the wake of Huarong’s missed earnings report.

But the stakes are high: a surprise default or painful restructuring risks triggering widespread panic. While Beijing will likely intervene to avoid a credit crisis should that happen, there’s “considerable” uncertainty over the timeliness and extent of such support, wrote Goldman Sachs analysts in a note earlier this month. UBS analysts agreed, warning investors to prepare for fading government support for state-owned enterprises.

“The problem with too big to fail is that it can quickly turn into too big to save,” said Michael Pettis, a Beijing-based professor of finance at Peking University. “China has since the financial crisis maintained stability by repressing risks. It can’t do that forever.”