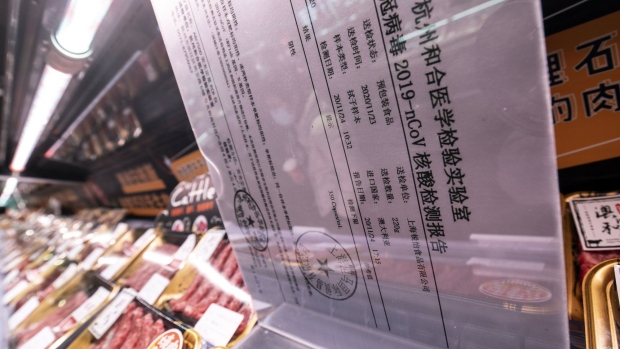 A Covid-19 test certification at the meat section. China’s focus on food packaging began after the country singled out imported salmon as a possible culprit for a Beijing resurgence. , Bloomberg

(Bloomberg) -- At an upscale supermarket west of Beijing, a box of disposable gloves stands in front of a glass counter selling Australian beef. Next to it is a sign saying: “Please buy this with peace of mind.”

“All the imported meats here have undergone nucleic acid testing. Consumers need not worry,” promises Li Xingzhen, a manager at Ole supermarket, which imports about 70% of its groceries. Her pledge offers a look at the new challenges facing retailers as many Chinese shoppers grow reluctant to buy overseas food products after Covid-19 infections were reported among people handling such items.

Seafood imports by China tumbled 12.5% last year, including a plunge of 32% in December from a year ago. While overall purchases of meat have remained robust amid a domestic shortage, the pressure on the global food industry is only poised to rise: Rabobank Group forecasts that China’s meat imports could plunge as much as 30% this year from a record in 2020.

The consumer distrust is being fueled at least partly by statements from the government, which has taken increasingly drastic steps to curb the risk of the virus spreading via food imports even though most international health authorities have downplayed the likelihood of such transmission. The World Health Organization has said there’s no evidence of people catching the virus via food and food packaging, while the U.S. Centers for Disease Control and Prevention says the chances of getting Covid-19 from frozen foods is very low.

It’s a debate with global ramifications and an increasingly contentious one because China is one of the world’s biggest buyers of many food products, accounting for as much as 45% of the global pork trade. China has gone even further with its frozen food theory, with state media suggesting the virus could have entered the country via frozen products or packaging. This comes as the hunt for the origins of the coronavirus becomes highly politicized, with a WHO team currently in Wuhan to probe further, and the U.S. pushing the idea it could have escaped from a lab in the city -- a claim China has denied.

In China, where pride in the country’s largely successful containment of the virus runs high, some consumers have become more cautious on products like foreign seafood. No visitors were seen checking out a one-for-one deal for prawns from Malaysia at Ole.

“I like imported shrimps, but I won’t be missing out if I don’t eat them now,” said Jia Jinghong, a retiree from Beijing. “There is a risk during this time. I dare not take the risk.”

How Do People Catch Covid-19? Here’s What Experts Say: QuickTake

China’s focus on food packaging began as early as June after the country singled out imported salmon as a possible culprit for a Beijing resurgence. Since November, consumers have been able to check the origin and flow of cold-chain foods, as well as virus testing certifications, by scanning mandatory QR codes.

China has also ordered mass-testing and disinfection of all frozen food imports, causing severe port congestion and lengthening the time taken to clear customs to one month from one week. Some small cities now ban the sales of imported meat. In Beijing and Shanghai, supermarkets are required to have separate shelves and sections for imported frozen food to avoid cross contamination.

Such moves could squeeze foreign suppliers. Stringent testing has disrupted sales and may cut the country’s pork imports, said Zhu Zengyong, a researcher for the Institute of Animal Science of the Chinese Academy of Agricultural Sciences. The effects will be particularly significant from about March to April, after the Chinese New Year peak demand season, and it coincides with the recovery of China’s domestic pig population after a devastating African swine fever outbreak in 2018, Zhu said.

In a report last year, the state-run Global Times raised the possibility that the coronavirus could have been passed on from imported frozen products into Wuhan, where the novel coronavirus was first identified. The nation has also seized on research suggesting there were infections in the U.S. and Italy that pre-date those in Wuhan.

But few experts have backed those theories, with the circumstances of how the virus moved from bats, their suspected source, to humans a stubborn mystery scientists are still trying to solve. Some say the pathogen could have somehow moved directly from bats to people, while others flag the possibility an intermediary animal may have been involved.

Over recent months, China has said traces of the pathogen were found on imported frozen food products or their packaging, and linked those to outbreaks in the major port cities of Dalian, Tianjin and Qingdao.

The fallout is being felt by even small businesses. Sarah Ye, an online retailer for baby products, now has a particularly hard task when she sells imported snacks to the young mothers in a WeChat group she founded for her business: Convincing her cautious clients the products are Covid-free. In a promotional campaign to sell processed cheese for kids, she uploaded the test report that shows a negative result for the packaging.