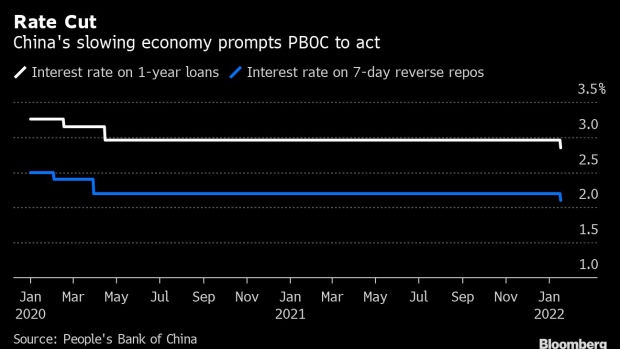 Gross domestic product grew 4% in the final quarter of 2021 from a year earlier, the National Bureau of Statistics said Monday, higher than the 3.3% rise projected by economists but slower than in previous three months. For the full year, the world’s second-largest economy expanded 8.1%, well above the government’s target of “over 6%.”

The economy was battered by repeated shocks in the latter half of last year: electricity shortages, defaults from a slow-moving housing and property crisis hitting confidence and investment, and repeated Covid-19 outbreaks, which damaged travel and private consumption. The slowdown prompted officials to try and front-load spending this year to boost investment and activity, with the central bank cutting policy interest rates for the first time since early 2020 to support growth.

Trade was a bright spot last year, with exports rising to a record $3.36 trillion for the whole of 2021 on stronger demand for Chinese goods from the U.S., Europe and Asia.

The economy expanded 1.6% on a quarter-on-quarter basis in the final three months of the year.

The outlook for 2022 is still unclear, with global demand forecast to slow, the omicron variant still spreading inside and outside the country, and no end to the housing market crisis that began with China Evergrande Group but has since snowballed. Beijing has made economic “stability” a priority this year ahead of a meeting in the fall where President Xi Jinping is expected to be confirmed as leader again, suggesting the government will take more stimulus steps to spur growth.

Industrial output rose 4.3% in December from a year earlier, versus the median forecast of 3.7%. For the full year, it went up 9.6%. Output is likely to be weak this month due to the upcoming Lunar New Year break, disruptions from stringent virus containment measures in Xi’an, Tianjin, some cities in Zhejiang and elsewhere, as well as production curbs imposed on heavy industries in northern China to ensure blue skies for Beijing’s Winter Olympics.

Retail sales growth slowed to 1.7% in December from 3.9% in November and versus an estimate of 3.8%. Total sales rose 12.5% in the year. While catering revenue and off-line retail sales stayed under pressure from the pandemic, holiday shopping toward the year-end and an early Spring Festival likely provided some support.

Fixed-asset investment was 4.9% bigger in 2021 than in 2020, with property investment 4.4% larger. Although authorities have moved to ease some of the restrictions on real-estate funding, the effect has yet to be reflected in the numbers.

The jobless rate was 5.1% at the end of December.