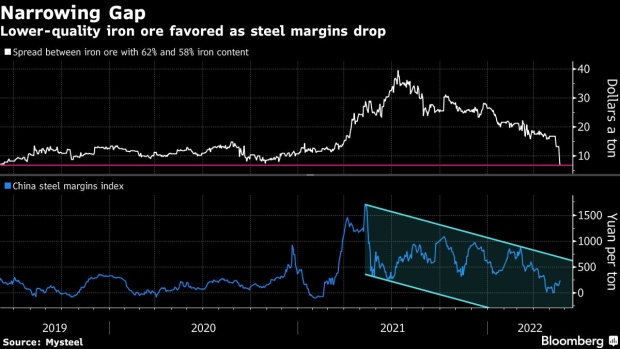 Jiangsu, the country’s second-biggest provincial economy, has increased tariffs for nearly 30 large factories either because they missed energy efficiency targets or are using outdated equipment. Its neighbor to the south, Zhejiang, is seeking feedback on a proposal to boost rates for more than 600 factories to cover higher natural gas costs.

The moves come after global coal and gas prices soared following Russia’s invasion of Ukraine, and underscore the government’s focus on reducing emissions and shifting its economy away from the large polluting industries of the past to more efficient high-tech sectors. But higher power prices will make it even harder for Beijing to meet its annual GDP growth target of 5.5%, which was already looking out of reach given the ongoing Covid Zero virus restrictions.

China’s economic miracle of the past four decades rested partly on cheap and abundant coal power. But since late last year, in an effort to reduce air pollution and meet climate goals, local officials have been allowed to raise electricity tariffs for industrial users, including an unlimited price ceiling for the biggest polluters.

In Jiangsu, which has an economy roughly the same size as South Korea, regulators raised power prices by as much as 0.5 yuan (7 cents) per kilowatt-hour starting May 1, a development first reported by BJX.com and confirmed by the local planning agency. The companies affected, including a crane builder, textile and petrochemical plants, had failed to meet the government’s targets of reducing energy use per unit of GDP produced.

Zhejiang is proposing to raise rates from July 1 to Dec. 31 by 0.172 yuan per kilowatt-hour for sectors including cement, glass, ceramics, metals and petrochemicals, according to a regulatory notice seeking public comments. The increase is needed to cover the rising cost of natural gas for the province’s power plants, estimated at an extra 7.9 billion yuan.

Both provinces border Shanghai, and the higher prices come just as the government tries to restart factories in the region hobbled by the city’s prolonged shutdown. Higher energy costs have already exacted a heavy toll on some industries, with officials in Guangdong canceling business licenses for nearly 70 local ceramics makers that haven’t been able to operate because of high fuel prices and less demand after the property market slowed.

“The curbs to old and energy-intensive factories aren’t just a local issue, but fall under the larger goals for China to upgrade and decarbonize its industries,” said Lara Dong, an analyst with S&P Global Commodity Insights.

The premium Chinese steel producers pay for higher-quality iron ore has shrunk to single figures from almost $40 a ton in the middle of 2021. It’s the smallest gap in three years, and shows mills opting for cheaper varieties as virus-driven lockdowns slow demand and hurt their profitability.

China rolled out a broad package of measures to support businesses and stimulate demand as it seeks to offset the damage from Covid lockdowns on the world’s second-largest economy.

China’s plans for 169 new and expanded coal projects could boost global methane emissions from mines that produce the dirtiest fossil fuel by 10% and jeopardize its own short-term climate targets, according to a new analysis.

The liquefied natural gas market is hurtling toward a potentially historic shortage this winter as the world rushes to secure the super-chilled fuel.