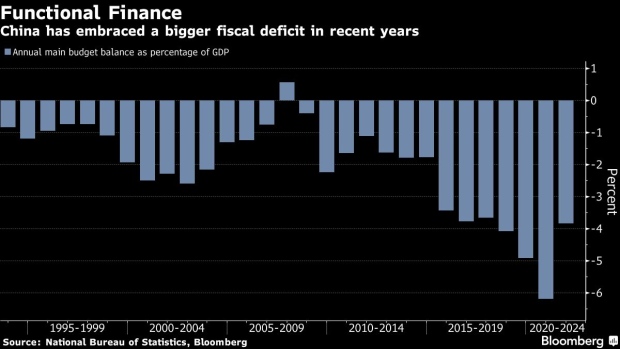 China urgently needs to “liberate” itself from traditional ideas that fiscal and monetary policy must be kept separate and that government deficits are bad, according to Liu Shangxi, head of the Chinese Academy of Fiscal Sciences, a think tank under the Ministry of Finance.

“Modern monetary theory at least sheds a ray of light for us to solve real conundrums and discuss what’s considered taboo in the past,” Liu said during a webinar last week.

The unconventional school of thought argues that countries borrowing in their own currencies don’t face hard debt limits because they can’t go broke. Central banks should print money to pay the debt interest, proponents say.

The theory is under the spotlight since China is relying more on fiscal stimulus and infrastructure investment this year to shore up growth battered by Covid outbreaks. Local governments though are facing a fiscal crunch because of a plunge in land sales, a major source of revenue, constraining their ability to spend and forcing them to borrow more.

“MMT is an important point of reference for China in strengthening the linkage between fiscal and monetary policy,” Guan Tao, a former official at the State Administration of Foreign Exchange, said at the same webinar last week

Even though it plans to increase fiscal spending this year, China reduced its official budget deficit target to 2.8% of gross domestic product from 3.2% in 2021 by drawing on savings from previous years.

The deficit cut reflects old-fashioned financial thinking that the government should aim to balance its budget, but in reality China is already transitioning to functional finance, where fiscal spending is set based on the economy’s need instead of expected revenue, Liu said.

Authorities have already called for better-linked fiscal and monetary policies this year. The PBOC has transferred 600 billion yuan ($93 billion) of profit to the central government to boost money supply to the economy, and recently asked banks to buy local government bonds to support investment projects.

China’s central bank accepts government bonds as collateral for short-term loans to banks but doesn’t buy them directly as central banks in the U.S., Europe and Japan do, a tool known as quantitative easing, which can keep government debt servicing costs low.

Liao Qun, Chongyang Institute for Financial Studies at Renmin University of China, wrote this week that the PBOC could go further and use “quantitative easing operations close to those advocated by MMT” if the need arises.

Yu Yongding, a former policy adviser to the PBOC, acknowledged that MMT is an idea that China could learn from, and proposed that the central bank buy government bonds from commercial banks in the open market when the economy is growing slower than its potential. That would help lower the government’s interest burden, he said.

The Chinese government hasn’t endorsed MMT, with some officials hinting its more appropriate for high-income economies like the U.S.

Lu Lei, deputy director of China’s foreign exchange regulator SAFE, told a forum in Beijing this month that “developed countries have pushed modern monetary theory to center-stage,” but added that China should develop its own monetary theories.