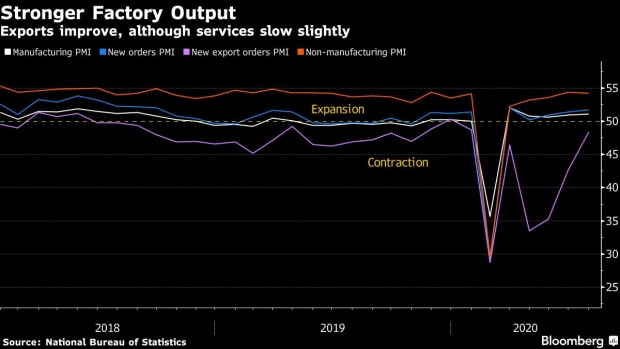 Sparks fly as employees work in the weld shop at the SAIC-GM-Wuling Automobile Co. Baojun Base plant, a joint venture between SAIC Motor Corp., General Motors Co. and Liuzhou Wuling Automobile Industry Co., in Liuzhou, Guangxi province, China, on Wednesday, May 23, 2018. GM and its partners sold 4 million vehicles in China in 2017, about 1 million more than the automaker sold in the U.S. Photographer: Qilai Shen/Bloomberg , Bloomberg

(Bloomberg) -- The first official gauge of China’s economy in the second half of the year showed continued upward momentum in the recovery.